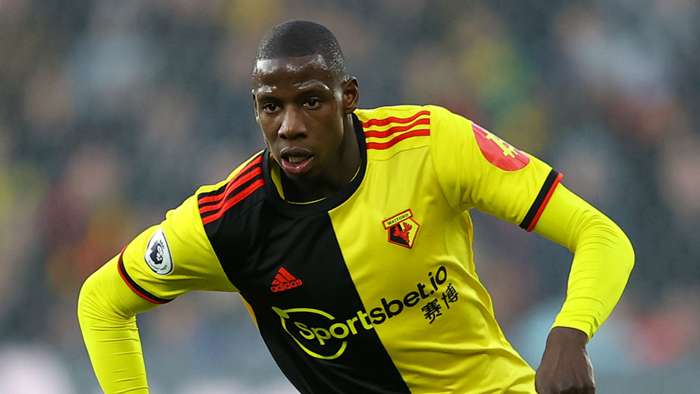 Everton have confirmed Abdoulaye Doucoure as their latest summer signing, bringing the French midfielder to Goodison Park from Watford in a deal reported to be worth£25 millionplus add-ons.

Doucoure, 27, spent four years at Vicarage Road prior to the Hornets' relegation from the Premier League in 2019-20.

But he is set to continue his career in the English top flight having penned a three-year deal to join Carlo Ancelotti's squad, which has already been bolstered with the captures of Napoli midfielder Allan and Real Madrid star James Rodriguez this week.

"Abdoulaye Doucoure has completed a transfer to Everton from Watford for an undisclosed fee, signing a three-year deal until the end of June 2023with a Club option for a fourth season," Everton announced in a statement released on the club's official website on Tuesday.

"I have been waiting a long time to come here and now it has happened so I am very happy," Doucoure explained upon signing for the Toffees.

"I had some interest from other clubs but from the beginning when Everton showed an interest in me I told my agent to focus on Everton.

"It was the only club I wanted to join.

"Everton has a big history in English football and it is a good club for me to have a step up in my career.

"I am very happy now to be an Everton player and very excited for the future.I can bring my energy - I am a powerful player, I can run a lot, all the game.

"I can add goals as well. I will try my best to score goals and help the team.

"It is an ambitious project here and it was a big part of my decision, having Director of Football Marcel Brands and the coach Carlo Ancelotti wanting me.

"When you come to a club you want the manager and, of course, the Board to support you.