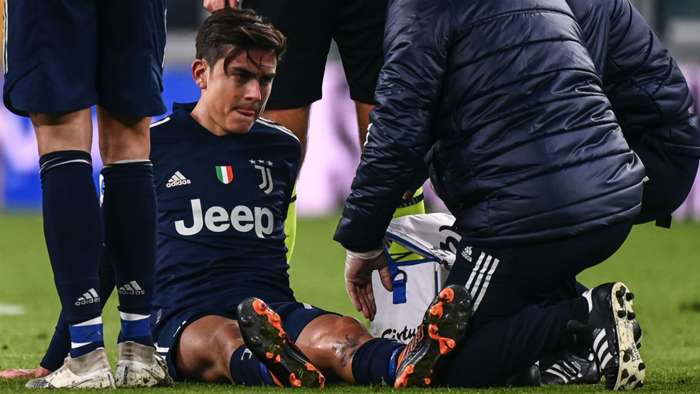 Dybala was forced off in the first half of Juve's 3-1 win against Sassuolo on Sunday after sustaining the knock to his knee, withDejan Kulusevski brought on as his replacement.

The Argentine was making his 11th Serie A appearance of the season at the Allianz Stadiumbut will now be forced to take in a spell on the sidelines, with Pirlo revealing the full extent of his fitness setback during a post-match interview with Sky Italia.

"Dybala has a blunt trauma a little below the knee," he said.

Pirlo went on to deliver an update on Weston McKennie, who also had to be withdrawn early on in the clash with Sassuolo after falling awkwardly while attempting a piece of skill in the oppositionpenalty area.

"McKennie had a problem, today he felt some pain," said the Juve head coach.

The Bianconeri will be withoutDybala and McKennie when they play host to Genoa in theirround of 16 Coppa Italia tie in midweek, and Federico Chiesa has also been ruled out of the encounter due to an ankle issue.

Dybala will also sit out a top-of-the-table meeting with Inter on Sundayand theSupercoppa showpiece against Napoli on January 20, leaving Pirlo with a selection dilemma heading into a crucial period.

Juve beat current Serie A leaders Milan in their own backyard before picking up another three points against Sassuolo, and are now only seven points behind the Rossoneri in the standings with a game in hand.

"It was important to have continuity and win,otherwise the success at San Siro would have been useless," Pirlo added on his side's latest victory. "We were a bit messy, but in the end, the three points count."

The Italian head coach is looking forward to coming up against Inter next weekend, but does not want complacency to set in among his players when Genoa arrive at Allianz Stadium on Wednesday.

He said: "These are great matches for anyone to play, we have many champions prepared to face this type of challenge. Now let's think aboutthe Italian Cup, then we will focus on Inter.