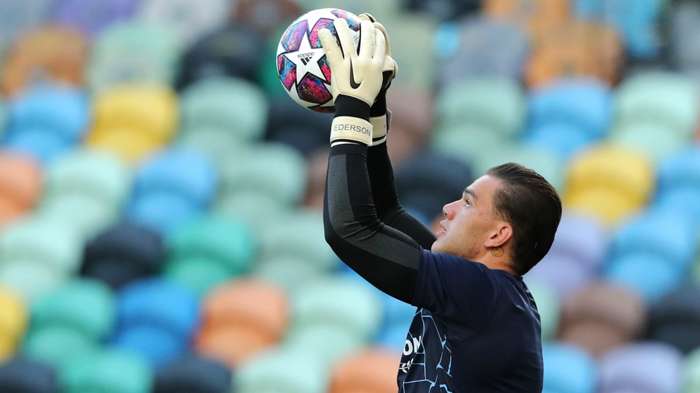 Manchester City goalkeeper Ederson will start Brazil's World Cup qualifier against Venezuela ahead of Liverpool's Alisson, while Gabriel Menino has been cut from the squad after testing positive for COVID-19.

Alisson returned to the squad for Friday's meeting with Venezuela and Tuesday's clash with Uruguay, but it is the Manchester City keeper who has got the nod from Tite.

"We have three great goalkeepers. Weverton played last time and comes in after a good sequence at Palmeiras. He played two very good games," said Tite.

"I spoke with the three of them personally, together with goalkeeper coach Claudio Taffarel. Alisson is an excellent goalkeeper. We have Ederson, who is experiencing a great technical and physical moment."

Tite also confirmed there will be starts for Allan, Everton Ribeiro and Gabriel Jesus, with Casemiro and Philippe Coutinho not in the squad due to coronavirus and injury respectively. Neymar, meanwhile, is being rested in the hope he can recover from a left leg issue to feature in Uruguay.

The Brazil boss is set to have one fewer option at right-back, however, after Menino was found to have contracted COVID-19, despite testing negative upon his arrival at the Granja Comary base on Monday.

"In the tests carried out yesterday, Gabriel Menino tested positive for COVID-19. All other players in the group tested negative," Brazil doctor Rodrigo Lasmar explained.

"It is important to note that, on Monday, when the players arrived, all members of the delegation were tested and the results were negative.

"We have already informed the medical department of Palmeiras. The player is asymptomatic, is already isolated and has been cut from the squad.

"All protective measures are being taken. We will perform a new round of tests before our trip to Uruguay, after the game against Venezuela."

Menino has played the bulk of the 2020 Campeonato Brasileiro season as a central midfielder and leads Palmeiras in terms of assists (three), duels won (91) and touches (920).

The 20-year-old has made 286 successful passes in the opposition half -the second most among his team-mates -and ranks third at Palmeiras in terms of dribbles completed (22) and tackles (34) this term.

Head coach Tite insisted there is no barrier to Brazil taking the field to face Venezuela and he is unsure whether a replacement for Menino will be drafted in.

Tite said: "The doctor will speed up the other tests. In the meantime there is noproblem for us to play. Roughly speaking, the information given to us -for all players and coaching staff -was that.

"These are challenges that all national teams have faced. The selection had a greater number than are actually here, either due to injury or to the COVID-19 problem.

"But opportunities arise. Pedro was called up … but there are also other opportunities for high-level players to come and show themselves.