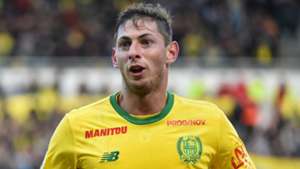 Cardiff City has submitted several documents to French prosecutors regarding Emiliano Sala to help with the decision on whether Nantes will face criminal proceedings for the death of their former player.

The Argentinian striker died when the plane carrying him to Wales crashed at sea last January as he was preparing to seal a move to Cardiff from the Ligue 1 club.

Sala's body was discovered in waters near the Channel Islands over two weeks after the plane disappeared - while the remains of pilot David Ibbotson have never been found.

Cardiff and Nantes have been in dispute over payment of the ?15 million (EUR17m/$19m) transfer fee they agreed on, as the Welsh club have argued they are not liable because he was not officially their player when the plane crashed.

Cardiff have now called for an investigation to determine whether the French club should be held criminally responsible.

"Cardiff City Football Club has been clear throughout the past 12 months that a full investigation of the facts leading up to the tragedy is required," a club spokesperson said.

"Not only to fully understand what led to the downing of the Piper PA-46 Malibu plane, but to answer the wider questions that have been highlighted in this case, specifically related to the use of illegal flights in the football industry and the role of intermediaries in player transfers.

"As a result of our investigation we believe there is sufficient evidence of wrongdoing that necessitates investigation by the French authorities of those responsible for the arrangement of the transfer on behalf of FC Nantes and for arranging the doomed flight.

"We have therefore passed over information to the Parquet de Nantes to assist their efforts. We remain committed to establishing the full facts and adhering to any final decision on our financial liability in the transfer."

Nantes, who have repeatedly denied any wrongdoing in the death of Sala, wore a tribute jersey to their former player during Sunday's league match against Bordeuax.

All profits from the Argentina-inspired kit were donated to the two Argentinian clubs Sala played for in his youth.

"Because he dreamed of wearing the jersey of the Argentina national team, the players of Nantes will give up their traditional yellow and green jersey for a blue and white kit," a statement from Nantes read.

"This jersey, from which the entire sales profits will be allocated to the two Argentinian training clubs of Emiliano, is a way of paying homage to him."