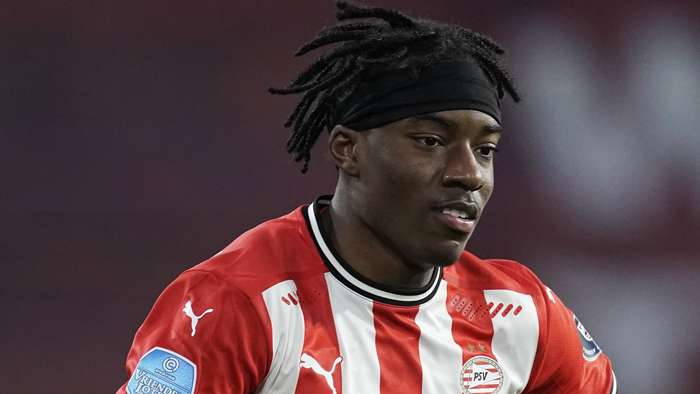 PSVs teenage star Noni Madueke has no regrets over leaving his native England for the Eredivisie, and believes that movingoverseas has proved invaluable for his development as a player.

The 19-year-old left Tottenham for the Dutch giants in 2018, despite attracting interest from the likes of Manchester United and Chelsea.

He is now an established member of the first team in Eindhoven, something he does not see as possible had he stayed put.

Speaking to reporters while on international duty for England Under-21s, Madueke affirmed: "Obviously its been great for my development. I wanted to go out and play first-team football at a young age and get ahead of my peers.

"Ive done that by getting into the England Under-21 squad and so on and so forth. The move was perfect for me at the time."

The Eredivisie has long been known for its ability to produce top young talents, who have gone on to bolster the ranks of Europes elite.

Ajax alone have sold Matthijs de Ligt, Frenkie de Jong and Donnie van de Beek to Juventus, Barcelona and Manchester United respectively in recent seasons; while Hakim Ziyech, who arrived at the Amsterdam club at the age of 23 from Heerenveen, moved on to Chelsea at a huge profit for his former side.

And just as Jadon Sancho judged that his progress would be better served in the Bundesliga with Borussia Dortmund than at Manchester City, Madueke jumped at the chance to hone his talents away from England.

"[Sancho] has opened the eyes to other talents,” theforward, who placed 28th in GoalsNxGn ranking of the best young talents in world football,toldVoetbal International last year. “A year after him, I went from Spurs to PSV. The plan that I had in mind then is now workingout the way I intended it.

"In England, it is very difficult as a young talent to get into the first team, especially at the bigger clubs. The squads are very large andthere is little room for youngsters. They often stay in reserve teams for a long time orare loaned out.

"There is little flow or chance to break through. That is completely different in the Netherlands."