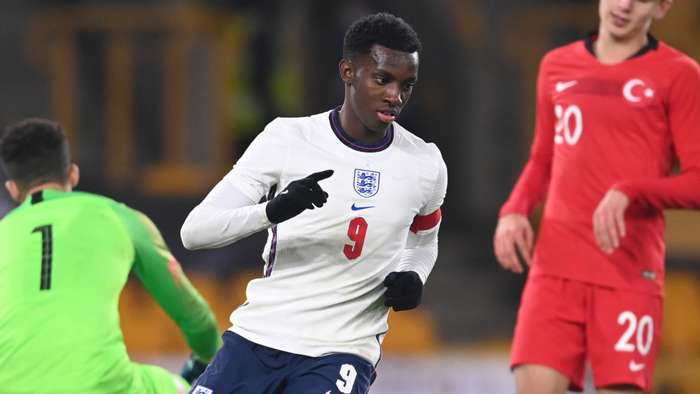 The Young Lions couldnt manage a shot on target in their 2-0 defeat to Portugal on Sunday, having lost their opening match to Switzerland last week.

England can still advance with a win by two goals over Croatia in the final match, but they need Portugal to beat Switzerland in the other Group D match.

Unless that happens, the tournament campaign will rank as a major disappointment for a team featuring players from Chelsea, Arsenal and Tottenham.

Having been named captain by Boothroyd ahead of the tournament, England Under-21s record goal scorer stepped up to take the press conference in difficult circumstances.

"We knew Portugal were a great side and that Switzerland were a good side but we were well prepared and it is down to us," Nketiah told reporters.

"We know we have the quality and it is just about producing it and the little details that are missing for us. That care and detail in the passing and creating is all a bit slow. We have got to look at ourselves and take chances in the transition when we have them.

"We have to learn, improve and try to finish strongly. The one thing we can all agree on is that we know what it means to represent your country. It wasnt for lack of trying. We just lacked that bit of quality when creating.

"Aidy has done brilliantly for all of us. When we were winning in qualifying, there wasnt as much attention on him. As players, we have to all look at ourselves first and foremost. We all know the quality that we have and we havent lived up to that or played to the best of our abilities, either individually or collectively."

"We do have players playing in the Premier League, Championship, Eredivisie and Bundesliga," Boothroyd said in Ljubljana. "I think we have players in all kinds of games. There might be something in the number of games they play [which is why they underperform] which I think is valid to come at me.

"They play Europa League, Champions League and it may be a bridge too far for some in terms of physical output. We dont take it too lightly in terms of the preparation and trouble that goes into it. Any tournament we go into, we want to reach the latter stages as thats where we learn most.

"I dont think any of our lads or staff are taking it lightly. We havent got time to sulk or moan. We havent created or scored anywhere near enough in the last two games. We have to get to the bottom of that. The last game is vital to show we can perform and we can win a game.

"When pressed over his future, Boothroyd added: "The only answer I can give is that I have been fortunate to have some massive highs and lows. I have had that in the rest of my career like losing in Play-Off finals, this is right up there with that and it does hurt because you always want to win.

"I have to do my job and pick the lads up, the staff up and if we cant go through, we want to finish on a high. Whilst there is still hope, we have to have a go."

Not only is Boothroyd being criticised for the 2021 campaign, but he also fell short in 2019 where a team with Mason Mount, Phil Foden, Tammy Abraham, Dominic Calvert-Lewin and James Maddison also exited at the group stage of the Euros.

England have become excited about the latest generation of footballers emerging from the country but that hypehasnt translated into success at the U21 level.