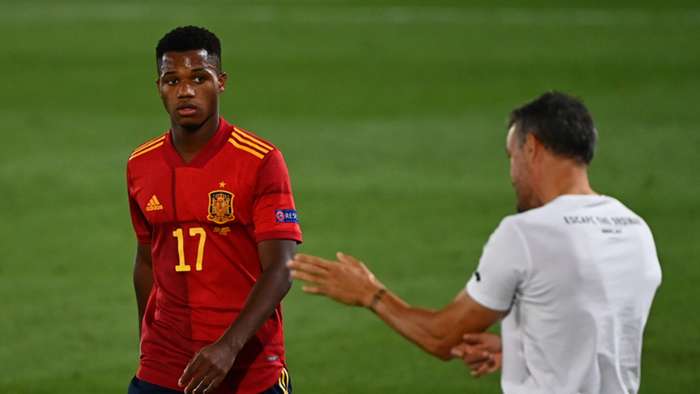 After winning an earlypenalty that allowed Sergio Ramos to open the scoring, Fati would himself get on the scoresheet in the 32nd minute as Spain strolled to a 4-0 win over Ukraine in the Nations League.

In the Barcelona attacker's first start for the national team, he became Spain's youngest goalscorer in style as he curled home an effort from the top of the box.

Fati, who played the full 90 minutes against Ukraine, took a game-high six shots, created two chances and his six attempted dribbles were also more than any other player on the pitch.

All in all it was a memorable first start for the 17-year-old and Enrique was full of praise for Fati afterwards, noting his supremeconfidence is combined with plenty of maturity.

"When we choose the squadwe do not look at his age. That does not mean that we do not have to understand that Ansu Fati will play bad games and will make mistakes many times. It is part of his learning, but that self-confidence is not normal," Enrique said post-match.

"Ansu Fati is very happy and has reasons. He is only 17 years old and has to mature, but that in his second game with the national team he dares to do all this...

"He brings hard work and humility. He has trained at an impressive paceand I am glad that he goes home with this joy.

"At his age it is easy for these highsto go to your head, but he is mature enough to know that the path he is following is the best. He is very calm and humble."

Fati had only made his senior international debut off the bench in Thursday's 1-1 draw againstGermany.

It's been a breakout year for the teenager for club and country with the young attacker making 33 appearances for Barcelona across the 2019-20 campaign and scoring eight goals.