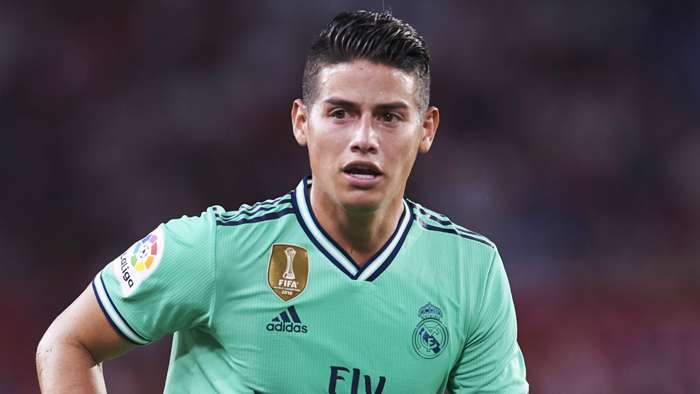 Everton have confirmed the signing of James Rodriguez from Real Madrid for a reported £22 million ($29m) fee.

The Colombia international has signed a two-year contract with an option for a third as he reunites with Carlo Ancelotti, who brought him to Madrid in 2014.

The midfielder then teamed up with Ancelotti again at Bayern Munich, where he spent two seasons on loan before returning to the Spanish capital last year.

James made just eight appearances in La Liga last season as Zinedine Zidane's men lifted the title and had less than a year left on his contract with the Santiago Bernabeu side.

“I am really, really happy to be at this great club, a club with so much history, and here with a manager who knows me really well,” the former Monaco and Porto startold Everton's website.

“I’m looking forward to achieving great things here – and winning things, which is what everyone’s aim is.

“I’ve come here to try to improve, to get better. I’ve also come here to help the team to win, to play good football – entertaining football.

“I’m convinced, with Carlo and his technical staff, we can achieve big things and one of the big reasons I signed was the presence of Carlo Ancelotti.

“I have enjoyed some great times with him previously at two different clubs. That was a massive reason to come here.”

He continued:“I’m a winner, I’m a real winner. I can see the plans here, the project here is very serious. Everyone means business.

“I think the seriousness and determination to win trophies can lead to silverware.

“I can see, too, these fans are real, true supporters. I hope we can have a good, positive, mutual feeling between ourselves.

“What they can be sure of is I am going to give everything in every game situation, every play, every build-up. I will be trying my absolute best.

“I have sensed that good feeling right from the very start, and it is excellent.”

Ancelotti, meanwhile, was delighted to welcome the 29-year-old to Goodison Park and hopes he can improve the team as they look to build on last season's 12th-place finish.

“James, as everyone knows, is a fantastic player with a lot of quality and a lot of ability to make assists for the strikers," the coach said.

“He’s really excited about the project of the club and the fact we want to improve. He was really excited to sign and I didn’t spend time to convince him - he was already convinced.