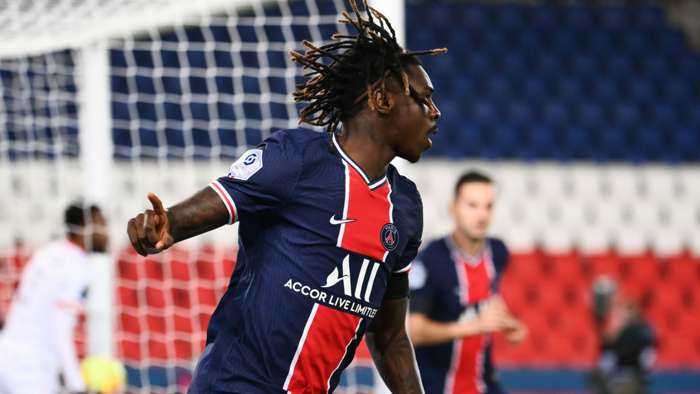 Everton would be willing to sell Moise Kean to Paris Saint-Germain should the French side want to make his loan deal permanent, says Toffees boss Carlo Ancelotti.

The 20-year-old looks to have rediscovered his best form at the Parc des Princes, scoring 10 goals in 17 games to spark rumours of a permanent move.

When asked about the possibility of letting the forward leave Goodison Park, Ancelotti appeared to suggest the club were ready to do a deal.

“First we have to look at the desire of the player,” the Italian told reporters. “If the player wants to stay at PSG then of course the two clubs have to sit at the table to talk about this, and we are open to talk.

“The club is open to talk if PSG wants to sign Moise Kean, who is doing really well in this moment.”

Ancelotti also played down rumours linking Bernard with a move away from the Merseysiders.

Roma are reportedly keen on signing the Brazilian and were rumoured to be preparing a swap deal involving goalkeeper Robin Olsen, who is on loan at Goodison Park.

“If the player desires to stay here we are not going to force him to leave,” said the former Chelseaboss.

“Until now he is happy to stay here. He didn’t play a lot but he never came to say: ‘I want to leave’ and we don’t want him to sell him full stop. This is the situation at the moment.”

The France international was not expected to return until February but is available just six weeks after going under the knife.

“His recovery was really fast – the medical staff and him did a fantastic job,” Ancelotti said.