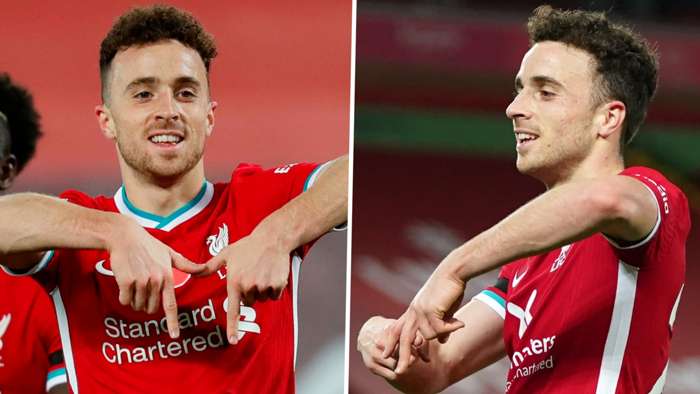 Diogo Jota has been in fiery form for Liverpoolfollowing his £41 million ($53m) move from Wolves in the summer, becoming the first Reds player sinceRobbie Fowlerin 1993 to score sevengoals in his first 10 appearances for the club.

Jota celebrated his goal against West Ham on October 31 by putting his fingers together to form the letter "M".

A few weeks later, when he doubled Liverpool's lead against Leicester in the Premier League on November 22, he once again made a letter with his hands during his celebrations - this time into the shape of the letter "A".

Fans have wondered what word Jota is spelling out with his goal celebrations, which are unique and in the same vein of Mohamed Salah and Erling Haaland's trademark goal festivities.

The theory that has proved to be the most solid is that he is spelling out 'Massarelos', his hometown in Portugal,located within the larger metropolis of Porto.

With "M" and "A" having both been spelled out, this theory is on the right track.

It is understood that Jota's letters celebration is different than what the likes of Ben Chilwell, Ross Barkley and Jack Grealish have done. The trio are part of a WhatsApp group consisting of Premier League-based footballers titled "The Avengers" and have also celebrated goals by forming the letter "A" with their fingers.

"We have a little group chat called The Avengers,"Maddison told EA Sports.

"It has Jack Grealish, Ross Barkley, Dele Alli and John McGinn are the footballers in the WhatsApp group."

Mason Greenwood has also celebrated by making the letter "A", dedicating his goal to former team-mateAngel Gomes, who was released by Manchester United.

This celebration involving shaping your fingers into the letter "A" has been around since the early 2000s, with Premier League players initially doing so to raise awareness for the foundation A-Star.

The foundation's name is taken from the idea that every young child has the capacity to be a "star".

Jota has been in prolific form for the Reds, setting a new record for becomingthe first player inLiverpoolhistory to score in his first four top-flight home matches after the Leicester game.

With Jota scoring goals aplenty, we'll know what he is spelling out through his celebrations soon enough - with every strike and celebration eacha puzzle piece.

While Jota spelling out the name of his hometown in Portugal seems the most likely explanation, fans on Twitter have done their own sleuthing about what he could possibly be spelling.

Some theories range from Jota perhaps spelling out the name of his team-mate - Sadio Mane - or planning to propose to someone!