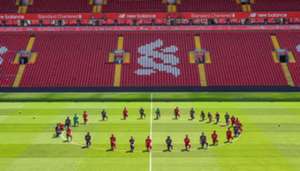 The Football Association has suggested footballers will not face suspension if they protest the murder of George Floyd during matches.

The Bundesliga saw several tributes and calls for justice following the death of another unarmed black man at the hands of police officers on May 25.

Minneapolis police officer Derek Chauvin has been charged with murder, having kept his knee on Floyd's neck for almost nine minutes while other officers, J. Alexander Kueng and Thomas K. Lane, helped hold the 46-year-old down and another, Tou Thao, stood close by to prevent bystanders from interfering.

The incident has sparked a wave of protests across the United States, while police and the national guard have violently cracked down on those calling for justice to be served.

Football stars have used their platforms to speak out against racism and police brutality, with the likes of Bundesliga stars Weston McKennie, Jadon Sancho, Achraf Hakimi and Marcus Thuram paying tribute to Floyd on the field during matches.

Premier League clubs have joined the calls for an end to racism, with Liverpool, Chelsea and Newcastle posting on social media images of players kneeling to show solidarity with the movement.

Kick It Out, an organisation working to eradicate racism in football, have urged more players to protest by taking a knee and FIFA has told leagues to "use common sense" when deciding whether to punish players for doing so. The FA has agreed to carefully review each case instead of handing out fines or suspensions for such statements.

"The FA strongly condemns discrimination of any kind and has endeavoured to ensure football in England is both diverse and inclusive in recent years," a spokesman told The Guardian.

"Where any behaviours or gestures on the pitch that may constitute a breach of the Laws of the Game have to be assessed, they would be reviewed on a case-by-case basis with a common sense approach and understanding of their context.

"The power of football can break down barriers across communities and we remain deeply committed to removing all forms of discrimination from across the game we all love."

The Premier League, which has been on hiatus since March because of the coronavirus, will return on June 17.