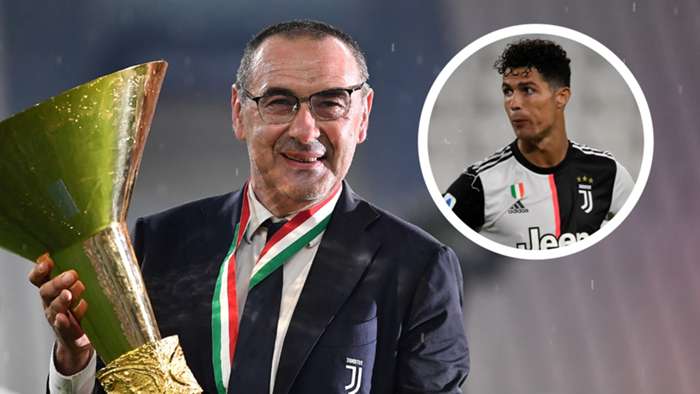 When a club wins its ninth successive league title, it is pretty difficult to find any kind of fairy-tale storyline within the main narrative.

Sarri has gone from working in a bank at the age of 40 to become the oldest manager to ever mastermind a Scudetto-winning campaign, in a feat that gives hope to all aspiring coaches everywhere, regardless of their footballing background.

The former Napoli and Chelsea boss has done it by sticking his principles despite the increased scrutiny that comes with taking charge of Europe's biggest clubs.

But if his progression to the very top of the Italian game is like something out of a fantasy novel, then the plot twist that could be on the horizon is more akin to a horror movie.

As while Sarri has done the bare minimum in retaining the Serie A trophy, failure to guide Juve to the promised land of the Champions League final has the potential to seal an early exit from the Allianz Stadium for the 61-year-old.

Sarri was not brought in by the Bianconeri to be the difference-maker in Europe's premier club competition. That is the role of Cristiano Ronaldo.

But Sarri was hired to ensure Juventus kept winning while playing the beautiful football that his Empoli and Napoli teams became known for around the continent.

Imposing that style on some of the world's best players, however, has proven difficult, with Juve regularly criticised for their slow, laboured, possession-based football throughout the course of the season.

No more so was that in evidence than during their shock 1-0 defeat to Lyon in the first leg of their Champions League last-16 tie - a result which has left their progression to the latter stages of the tournament in doubt as it returns on Friday.

"It's difficult to explain why, but in thefirst half we moved the ball too slowly sothe opposition were going to press, win the ball back andscore," SarritoldSky Sport Italia post-match in France.

"We lacked determination and aggression when attacking, and for 15 minutes lacked it defensively too. The second half was better, but it's not enough for a Champions League match. I don't know whyI cannot get the players to understand the importance of moving the ball quickly.

"When the ball is slow, you lose positions, you allow the opposition to close you down, to be aggressive and steal the ball back.I don't even think the Lyon pressing was that strong. We just moved it slowly, never varied the tempo, and when you do that, it's unlikely you're going to create anything.

"This is fundamental. We'll keep working on it and sooner or later this concept will get into their heads."

Whether it has got through to Juve's players or not remains up for debate. Despite wrapping up the Serie A title race, the Turin outfit's form has been far from impressive since football returned following the coronavirus-enforced halt in proceedings.

Sarri's side won just two of their final eight league matches of the season, leaving them with their lowest points total (83) andtheir most defeats in a single campaign (seven) of the past decade.

That came after a sluggish performance in the Coppa Italia final that resulted in defeat to Napoli on penalties and Sarri being criticised on social media by Ronaldo's sister, among plenty others.

Understandably questions have been asked regarding Sarri's future, though for now the Juve hierarchy continue to back their man.

"The talk is all in the media," chief football officer Fabio ParaticitoldSky Sport Italia in a recent interview. "I've been here for 10 years and we have been top of the table basically for nine of them non-stop.

"We won trophies with Massmiliano Allegri over five years, Serie A and Super Cups. Yet every time after a draw, even a win, we've always had internal meetings. We're used to the speculation, we laugh about it. Without a doubt, Sarri will be the Juventus coach next season."

It is all well and good saying that when the destiny of the Champions League remains in the balance, but it is hard not to feel that whether Sarri stays on or not will be dictated by how the Old Lady fare in Europe.

Despite heading into the return leg against Lyon with a deficit to overturn, they are heavy favourites to do so on home soil despite showing some signs of fatigue after Serie A's gruelling late-season schedule.

From there they hope to head to Lisbon, and the city where Ronaldo began his professional career.

It feels only right that the Portugal star will light up what became his adopted home city during his teenage years, but with either Manchester City or Real Madrid to come in the quarter-finals before a likely semi-final against Barcelona or Bayern Munich, even the world's most prodigious goalscorer might not be enough if Sarri's team continue to labour around him.

If Sarri does depart, Juve would not be short of options in terms of a replacement. Mauricio Pochettino remains out of work, Allegri could be tempted back after his year-long sabbatical while Antonio Conte's unhappiness with the Inter board's apparent lack of support for him could yet end with the fiery Italian leaving San Siro after just one season.

For now, though, it is Sarri's job to see through. For all the critics of his style of play and the apparent struggles of the Juventus players to fully grasp 'Sarriball', they still have a squad capable of conquering Europe.

"I told them, if you won with me who has never won anything, you must be really good," Sarri told Sky Sport Italia in a typically humble mannerafter the Scudetto was secured.