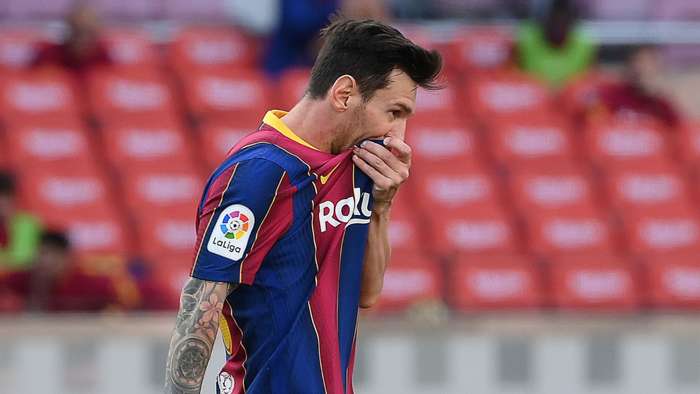 Lionel Messi's father and agent Jorge has categorically denied that the Barcelona star is considering a move to Paris Saint-Germain next summer.

Player and club were ultimately reconciled, with Messi tellingGoalin an exclusive interview that the only way he could have left in the summer of 2020 was if a team had met his prohibitive €700 million release clause.

What will happen once the 2020-21 season, however, remains anybody's guess.

Manchester City, coached by Leo's former Barca mentor Pep Guardiola, have consistently been named as the most likely destination for a transfer, whileESPNsuggested that PSG were also an option.

According to the channel, contact had already been made between the French champions and Messi Sr. in order to broker a deal, with negotiations possible as early as January.

But the agent gave that report short shrift, borrowing one of United States president Donald Trump's most infamous phrases in order to dismiss the story.

"Stop inventing! Fake news," Jorge fired on Instagram, posting his message over a screenshot of the offending transfer rumour.

Messi is currently in his native Argentina preparing for Thursday's CONMEBOL World Cup qualifier at home to Paraguay, as the Albiceleste seek to continue their 100 per cent record in the competition so far.

At the weekend the Barca captain found himself in the unusual position of sitting on the bench at kick-off after being left out of the starting line-up by coach Ronald Koeman, although his presence proved decisive nonetheless as he came on at half-time to contribute two goals and an assist to his side's 5-2 defeat of Betis.

"Messi has shown me to be a person who wants to win things and continue to be the best, even though he has had his problems with the club," Koeman toldSport of his star.

"Barcelona have been, are and will be a better team with Messi than without. When I arrived, they told me that Messi was unhappy.

"We spoke at his house and he explained his reasons to me. I was honest. I told him that the only thing is the system, his position on the field, his importance in the team.

"But the problems that he had had with the club I couldn't change. From the first day I have said the same thing. He is the best and is committed to the club.

"He has had his issues, his problems this summer, but since he returned to training he has been very good.