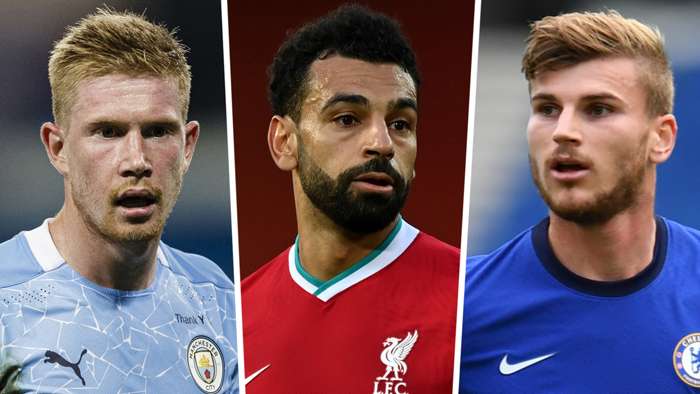 Gameweek 2 sees a full set of fixtures return, with Manchester United and Manchester City both in action for the first time against Crystal Palace and Wolves respectively.

From team selection adviceto possible captain picks,Goal is on hand to help you with your selections to turn those arrows green and climb your league tables.

Death, taxes and Salahscoring at Anfield. The Liverpool star was captained by more than 890,000managers in Gameweek 1 and duly delivered as he smashed ina hat-trick against Leeds United.

While the Egyptian was taking care of business against bucket-sitting Marcelo Bielsa and his team, it was a quiet evening for Trent Alexander-Arnold (£7.5m) and Sadio Mane (£11.9m),the latter seeinghis price drop as a result,with both struggling to make a significant impact on the match.

That has seen bothtransferred out by over 200,000 FPL bosses per player, although that seems a little hastygiven they were among the highest points scorers in the game last season and there is every chance they'll record big numbers against Chelsea- Alexander-Arnold loves a goal at Stamford Bridge - in their next fixture.

They aren't, however, top of the most-transferred out list ahead of Gameweek 2. Timo Werner (£9.5m) takes that honour, with over 400,000 FPL managers having got rid.

Again, that seems a little premature given the Germany internationalwas arguably Chelsea's best player in their 3-1 win over Brighton and heconfirmedon Wednesday that he will be fit to face Liverpool despite a slight knee knock.

Meanwhile, the highest-scoring player from the 2019-20 season will get his first action of the new campaign on Monday as Kevin De Bruyne (£11.5m) lines up against Wolves at Molineux.

While his 251-point haul will be difficult to surpass, you can guaranteethe Belgian will be one of Pep Guardiola's most used players despite his penchant for heavy rotation.

Manchester United are also featuring for the first time this season as they face Crystal Palace at Old Trafford.

He'll likely be on set-piece duty again in addition to playing a pivotal role in Ole Gunnar Solskjaer's starting XI, although if you're looking for a slightly cheaper option,Mason Greenwood (£7.5m) could be the one. The England forward should rack up plenty of minutes, especially if United fail to land Jadon Sancho - or an alternative - before October 5.

A word of warning, though - he may not be involved against Palace, given Solskjaer's comments about the 18-year-old needing a rest over the summer that England failed to granthim.

After their impressive win over Fulham in the opening game of the new campaign, Arsenal and their attacking line should be high on the agenda for those looking to make changes to their team early on.

Pierre-Emerick Aubameyang (£12m) is staying in north London for the next three years and he'll undoubtedly be one of the top-scoring FPL players this season, with West Ham at homeup next for the Gunners, which could see him add to his seven-point start.

Willian (£8.1m) is another that should be looked at. The Brazilian claimed three assists against Fulham and appears to be first choice in the role on the right side of the Arsenal attack. He'll also take his fair share of free-kicks and will be determined to prove Chelsea wrong in not meeting his contract demands.

Carlo Ancelotti's Everton may well have aspirations of breaking into the top four this season after a hugely productive summer that saw the likes of James Rodriguez (£7.5m), Allan (£5.5m) and Abdoulaye Doucoure (£5.5m) arrive.

The 1-0 win away at Tottenham proved they should be taken very seriously, with James pulling the strings and seeming a solid FPL investment at £7.5m, while Dominic Calvert-Lewin (£7.1m) appears to be the first choice striker once again this season.

Although fairly pricey, Lucas Digne (£6m) should prove a popular pick once again this campaig,nand be mindful of the fact that the Toffees face West Brom (H), Crystal Palace (A) and Brighton (H) in their next three matches.

If you're after a budget striker then look no further than Callum Wilson (£6.5m). The Newcastle forward looked sharp and got his goal on his debut against West Ham and hasn't as yet seen his price rise, with Brighton at home next up for Steve Bruce's men.

After advising Aubameyang (seven points)and Mane (two points) last week, it's fair to say our picks for Gameweek 2 need to be a whole lot better!

We're going with Arsenal again, however, with the in-form Willian (£8.1m) sure to start against a fragile West Ham, who were comfortably beaten by Newcastle in their first fixture of the season.

An alternative pick is Manchester United midfielder, and the club's newly-crowned Player of the Year, Bruno Fernandes (£10.5m).

Solskjaer's side haven't looked great in their limited number of pre-season matches but the same could have beensaid for Arsenal, who got off to a fine start against Fulham when the serious business began.

Crystal Palace may have won their opening fixture, but a trip to Old Trafford represents an altogether different challenge and United will undoubtedly be confident of getting off to a positive start.