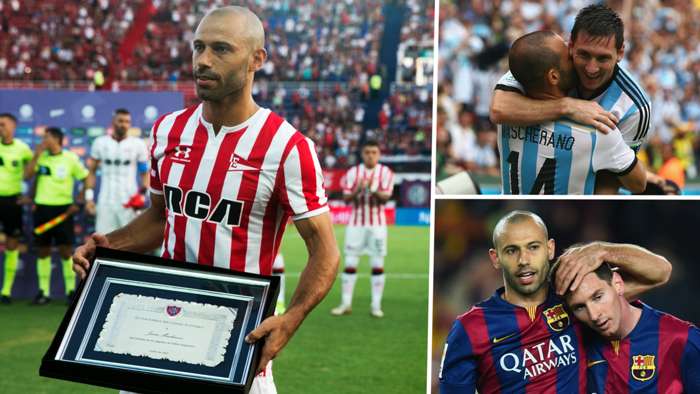 When one pictures Javier Mascherano at his prime, the image is invariably accompanied by a stream of blood.

But simply remembering Mascherano's sacrifices as he says goodbye to the professional game would be to do the player a disservice: he was also, alongside Lionel Messi, the most successful Argentine footballer of his generation and a man of rare, if understated, talents on the pitch.

“I wish to announced that today I am retiring from professional football,” the 36-year-old told reporters at the end of Estudiantes' 1-0 defeat to Argentinos Juniors on Sunday. “I would like to thank this club, which gave me the opportunity to end my career in Argentina.”

A subdued loss in an empty stadium playing a tournament which has failed to raise excitement even amongst Argentina's most die-hard football fans was perhaps an unfitting setting for a man who represented his nation in four World Cups and starred in one of the greatest club sides ever to take the field during Pep Guardiola's Barca stint.

But the outpouring of tributes from across the globe in reaction to the decision made it clear that Mascherano was one of a kind:an example both as a footballer and as a person.

As a player his commitment and intensity invariably stand out. Mascherano was a bantamweight who packed the punch of a Tyson or Holyfield, making up for his diminutive stature with bounds of aggression,which at the same time he rarely allowed to spiral out of control into unjustified violence or to cloud his vision of the game.

At Barcelona he made the transition from tough-tackling midfield hardman to classy passing centre-back with relative ease, providing the perfect foil to the more orthodox talents of Gerard Pique.

It is easy to play down the difficulty of such a shift at the age of 26 whilecompeting with some of the best players in the world, but Mascherano took it in his stride and bossed the Blaugrana defence for the best part of a decade.

“The club has signed a player who I, as coach, would not trade for anyone,” Guardiola told reporters back in 2012. “I would never sell him, he's a unique signing. We are delighted to have him.”

A different kind of change also awaited Mascherano with the Albiceleste. Following the fiasco of the 2011 Copa America, new boss Alejandro Sabella made the decision to strip the midfielder of the captain's armband, giving it instead to Messi in the hope that it would galvanise the Barca wizard when he pulled on the Argentina shirt.

If that decision passed largely without comment it was down to the humility and generosity of spirit in Mascherano to relinquish the honour he had first received from fellow ex-captain Diego Maradona prior to the 2010 World Cup.

“He was the first to tell me I had to be captain,” Messi remarked toTyC Sportsfollowing his acceptance of the armband.

The San Lorenzo native nevertheless continued to be Argentina's leader on the field, captain in all but name. His inspirational influence perhaps kept him going in the Seleccion a little too long after his abilities had started to wane, culminating in international retirement following the 2018 World Cup.

It was hard, however,for anyone to forget the heroics he had performed four years earlier in Brazil, grabbing his team-mates by the scruff of the neck and urging them to keep fighting towards the final.

Certainly, once Mascherano's impeccable physical attributes faded his decline was rapid, leaving Barca in 2018 for the Chinese Super League before closing out his career at Estudiantes as a shadow of the player he once was.

Even at his peak for Argentina, there remains a nagging doubt that his towering personality in the middle of the pitch clouded the judgement of a succession of national team coaches.

El Jefecito's abilities perhaps could have been better deployed in the side's ever-shaky defence as in Barcelona, rather than persisting with the star in the engine room.

That decision meant the Albiceleste continued to field a classic spoiler when most of their rivals had long since switched to a No.5 more comfortable starting attacks than breaking them up, a conundrum that contributed to many of their creative issues.

And that, arguably, goes part of the way to explaining why Messi, dragged ever-deeper to get his team moving, has struggled to recreate his sparkling Barca career in international colours.

It is easy to draw such conclusions with the benefit of hindsight, though. What is undeniable is that Mascherano was always there for Argentina, battling and coming to the rescue when his more cultured team-mates went missing.

Ultimately the numbers speak for themselves. Just shy of 20 major titles for Barcelona, a record 147 Argentina caps and over a decade standing as one of the very best first in the Premier League and later in Spain.