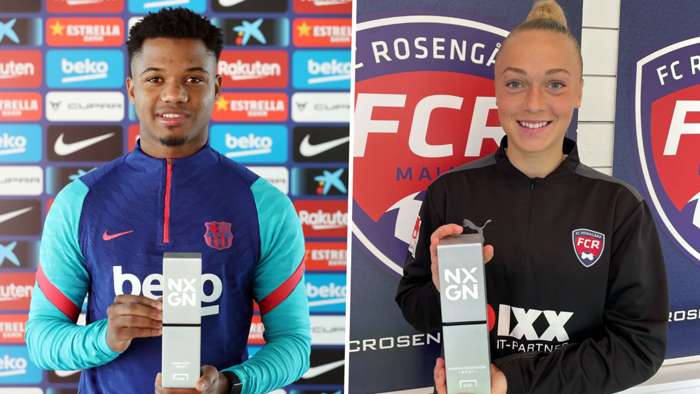 Barcelona forward Ansu Fati and Rosengard midfielder Hanna Bennison have been crowned the winners of NXGN 2021 after being voted the best teenagefootballers on the planet.

Journalists from across Goals 44editions voted on the brightest wonderkids in the game, born on or after January 1, 2002.

The Barca starlet is rewarded for an exceptional first two seasons in the first team at Camp Nou, during which time he has broken countless records, including becoming the youngest-ever goalscorer in the Champions League.

Fati, 18, is also the youngest player to find the net in the history of the Spanish national team, having made his international debut in September 2020, and follows in the footsteps of previous winners suchJadon Sancho, Gigi Donnarumma and Rodrygo.

"I want to thank those who have votedfor me and, of course, my team-mates," Fati told Goalupon receiving his award. "Without them, this would not have been possible.

"Also, thank youto all the coaches I have ever had."

Camavinga proved to be Fatis nearest challenger after a year in which he cemented his standing as the most talented teenage midfielder in the world, with the French 18-year-oldhaving debuted and scored for his country during the early months of the season.

Reyna, meanwhile, rounds out the podium after becoming a key member of Dortmunds youthful, star-studdedattack, as well as a full international with the United States.

As well as having two members of the top five, Dortmund is also home to the youngest player on the list, with 16-year-old Youssoufa Moukoko placing 15th after forcing his wayinto the senior squadat Signal Iduna Park.

Ajax are the most well-represented teamon the mens 50-strong list, with the Dutch champions able to boast five players, led by seventh-placed Ryan Gravenberch.

Bennison, meanwhile, succeeds inaugural womens winner Lena Oberdorf after continually impressing for Rosengard in both the Damallsvenskan and the Womens Champions League.

The 18-year-old has been a regular in the Rosengard midfield since the age of 16, and scored her first Champions League goal in December.

She is also a full Sweden international, having made her debut in November 2019 against world champions, the United States.

"It feels so good," Bennison toldGoalupon accepting the award."It was nothing that I had expected, so Im very happy and grateful.”

Ajax striker Nikita Tromp claims second place, with the 18-year-old earning comparisons to compatriot Vivianne Miedema for her goalscoring exploits, even if her game is far different from the Arsenal stars.