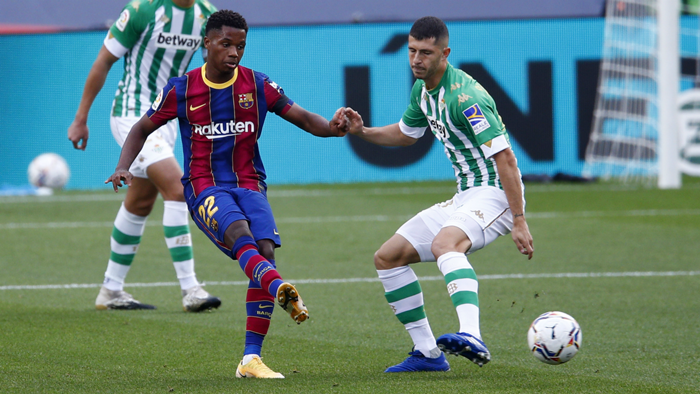 Barcelona sensation Ansu Fati suffered a muscle tear during his side's 5-2 victory over Real Betis, the club confirmed on Saturday.

Fati, 18, started for Barca in the absence of Lionel Messi from the first XI as the Catalans looked to bounce back from a run of poor form in La Liga.

But he was only able to complete the first 45 minutes, during which Barca struggled to overcome the Seville side as they entered the break tied at 1-1.

Messi replaced his young team-mate at half-time and proceeded to score twice to lead his team to a much-needed victory.

And after the game, Barca confirmed that Fati would require a spell on the sidelines after sustaining a knee injury.

"Tests carried out this afternoon have shown that Ansu Fati has an internal meniscus tear in his left knee," the club explained on Twitter.

"The treatment to be followed will be determined in the coming days."

LATEST NEWS ‼ Tests carried out this afternoon have shown that Ansu Fati has an internal meniscus tear in his left knee. The treatment to be followed will be determined in the coming days. pic.twitter.com/CF3FZaur5P

Coach Ronald Koeman attempted to play down the severity of Fati's condition, suggesting that the early substitution was a precaution.

"He was in some discomfort at the break and we didn't want to risk him. That was the reason behind the substitution," the Dutchman revealed to reporters when asked about the forward's health.

While Spain are yet to comment on Fati, the tear looks likely to rule him out of action for the upcoming international break, having become the nation's youngest-ever goalscorer back in September with his strike against Ukraine.

La Roja are scheduled to face the Netherlands on Wednesday in a friendly clash before their UEFA Nations League double-header against Switzerland and Germany on November 14 and 17 respectively.