Fati injury offers Dembele yet another last chance at Barcelona 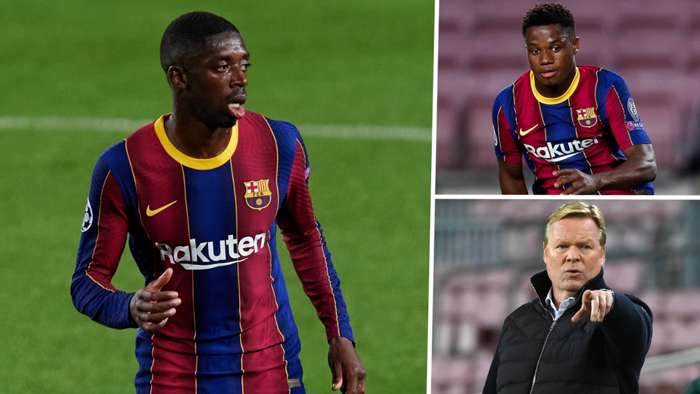 For well over a year, Barca have been on the verge of cutting their considerable losses on a player signed from Borussia Dortmund in 2017 for a staggering €105 million (£94m/$124m).

The news that teenage sensation Fati has been ruled out until March has come as a hammer blow to Barca.

After exploding onto the scene last year, the Spain international had begun the new season as a regular in Ronald Koeman's starting line-up, providing the Blaugrana attack with the kind of width and pace that it was so sorely lacking.

With 20-year-old Trincao having only just arrived at Camp Nou, Philippe Coutinho unsuited to playing on the flank and Antoine Griezmann trying his best to fill the void vacated by Luis Suarez at centre-forward, Dembele is Fati's obvious replacement on the left wing, starting with this weekend's massive Liga showdown with Atletico Madrid.

However, as Barca have repeatedly learned to their cost, relying on the France internationalis, sadly, never a good idea.

Dembele, of course, was a panic-buy, bought for an exorbitant fee on the back of one good season at Dortmund, after the shock loss of Neymar to Paris Saint-Germain.

However, he got injured shortly after his arrival and missed more than four months of his debut campaign with two separate muscular issues. He has since suffered one setback after another.

In spite of this, Barca bizarrely felt no real need to sign another attacker during the January transfer window because Dembele was poised to return from his latest hamstring injury. It was the kind of act of folly that came to typify Josep Maria Bartomeu's disastrous reign as president.

Ahead of his anticipated return to action at the start of February, then-coach Quique Setien told reporters, "“It makes me cry to see how intensely and how much Ousmane is working in training.”

Just a couple of days later, Dembele broke down again and was forced to undergo another operation on his right hamstring.

"The tear was larger than we thought and the operation itself was more complex than the one I performed on him in 2017," Doctor Lasse Lempeinen was quoted as saying by AS.

Dembele was ruled out for six months and made his return to competitive action, on schedule, at the tail end of September.

Barca bossKoeman has, unsurprisingly, managed his game time cautiously, while at the same time bringing him in for extra fitness work, and there have been signs that the World Cup-winner is approaching something resembling his best form.

There have already been a couple of goals and an assist in three Champions League appearances, while his opener in the 5-2 rout of Liga rivals Real Betis just before the international break was classic Dembele.

He picked up a ball on the right wing, cut inside and smashed the ball into the top corner of the net with his left foot.

Despite the flashes of brilliance, though, Didier Deschamps decided against naming Dembele in his latest France squad.

"Does he still have a chance of a recall? Yes, of course, but Ousmane is coming back from a major injury. We must give him time,” the Bleus boss told reporters.

"I know what he is capable of but he had physical problems. Now it is up to him to find his full potential."

And the onus really is on Dembele to turn his Camp Nou career around.

He has undoubtedly been unfortunate with injuries, but there haslong been a feeling at Barcelona that Dembele has notlooked after his body well.

Indeed, Lionel Messi has previously described his team-mate as "a phenomenon on the field". The implication was that he was letting himself down off it.

Of course, players blessed with explosive pace are always more vulnerable to muscular issues, but the club has been repeatedly left frustrated by Dembele's ill-discipline. There have been numerous incidents of tardiness, as well as accusations of a lack of professionalism.

"Ousmane's a good lad but he doesn't control his life and he doesn't respect the time when he should be resting at all," Dembele's former chef, Mickael Naya, told Le Parisien. "There is no structure in place within his close circle."

Make no mistake about it: had any club made a sizeable bid for Dembele during the summer transfer window, cash-strapped Barcelona would have gleefully accepted.

However, nobody was willing to offer anything other than a loan deal to a player with a dismal injury record – he has had nine different spells on the sidelines since September 2017, missing approximately 80 games in the process.

So, while there is optimism that Dembele might be able to soften the blow of losing Fati for four months, that isall it is: optimism. We aretalking about hope rather than expectancy at this stage.

When the full extent of Fati's injury was revealed, it was immediately reported that Barcelona might resist any offers for Dembele during the winter window.

However, it was pure speculation, utterly hypothetical. The sad truth is that there is no guarantee that Dembele's body will withstand one of the most intensive fixture lists in football history.

As Dr. Lempeinen warned, "The biggest risk when dealing with hamstring injuries is if you have suffered previous problems."

Unfortunately, Dembele has plenty of previous problems and the cold, hard reality is that he cannot afford any more.