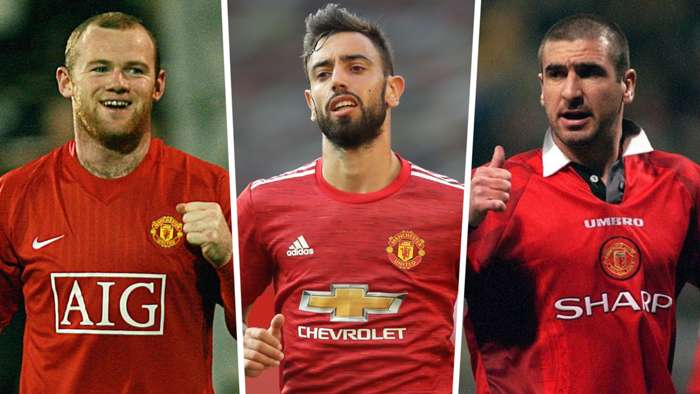 Bruno Fernandes has been likened to Manchester United legend Wayne Rooney and Eric Cantona by Phil Neville, with the Portuguese considered to have made the same impact at Old Trafford as iconic figures from the past.

A €55 million (£47m/$60m) deal was put in place with Sporting, allowing a classy playmaker to make his way to Old Trafford.

Fernandes hit the ground running in English football and became a key man for Ole Gunnar Solskjaer as a top-four finish was secured and three semi-finals were reached in 2019-20.

Maintaining those standards was always going to be difficult, and there have been slight wobbles at times, but the 26-year-old has remained an inspiration figure for United.

Those qualities were highlighted once again in a 3-1 victory over Everton on Saturday, with Neville seeing shades of heroes from years gone by in a talismanic star of the present.

“Since Fernandes joined the club I don’t think he’s had a dip yet,” the former United defender told Premier League Productions.

“You thought after his first initial goals, assists and impact that he made, you thought ‘Where’s that dip coming? Can he do it in the second season? He’s doing it even better.

“You’ve seen players that have come to Manchester United over the last probably 10, 15 years, I don’t think anyone has had as big an impact in such a short space of time as him.

“Maybe Rooney, maybe Cantona, those types of names, I think he’s had a similar impact too.

“His stats, his goals, his assists, his performances. Rooney came in and scored a hat-trick in his first game, Cantona comes in, puts his collar up and says ‘I’m a Manchester United player’.

“That type of impact he’s had, even in a team that probably isn’t as good as that team Rooney and Cantona played in.”