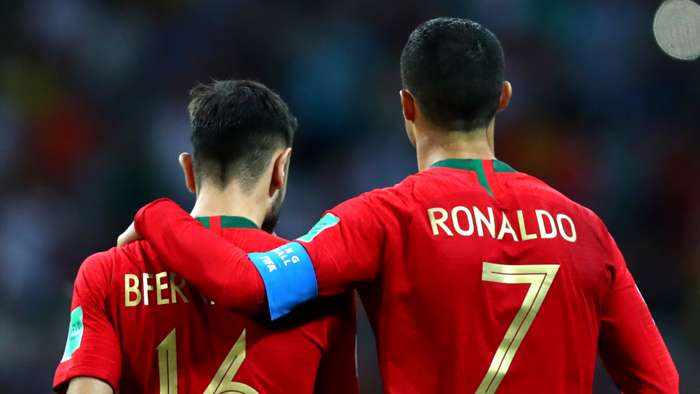 Bruno Fernandes is looking to help Cristiano Ronaldo re-write the record books, with a Manchester United star of the present hoping to see one from the past become the greatest goalscorer in the history of international football.

Only one man now sits above him at the top of a notable chart, with Iran legend Ali Daei having plundered 109 goals for his country.

Chasing down another entry in the history books has become a priority for Ronaldo in what has already been a remarkable career.

He is now 35 years of age, but is showing no sign of slowing down and time remains on his side.

The Juventus superstar can also count on the assistance of those around him when it comes to adding another stunning achievement to his glittering roll of honour.

Fernandes is another key part of Portugal’s plans and the United midfielder is determined to help his illustrious countryman clear a hurdle that few could dare to dream of taking on.

The Red Devils talisman told United Review of Ronaldo: “101!For me, and I think for most of the people now, it’s normal. You see when someone watches the games, if he doesn’t score, for everyone, it is a bad game because, normally, he always scores.

“You wait for a goal from him or for him to do something different. Of course, I’m really happy to have a chance to play alongside him and I hope he can achieve the record he wants, for sure.

“Maybe I can help him to achieve that record with the national team.”

It may be that Ronaldo sets another record with no fans in attendance to witness the occasion.

The hope is that supporters will soon be allowed back into stadiums, albeit with record capacities to start with, with Fernandes admitting that football loses something when there is no atmosphere.

He added: “I think I feel this support a lot on social media.

“We have a lot of fans of Manchester United and I can feel all the love they have to give you on social media, on the streets and everywhere really.

“I think, now, the most important thing is for everyone to be healthy and, as soon as possible, everybody will be able to come to the stadium. Football without fans is not like a football game, you know. I sat with Cristiano to talk about it after the game with the national team.

“It’s like streets without cars. It’s not a street.