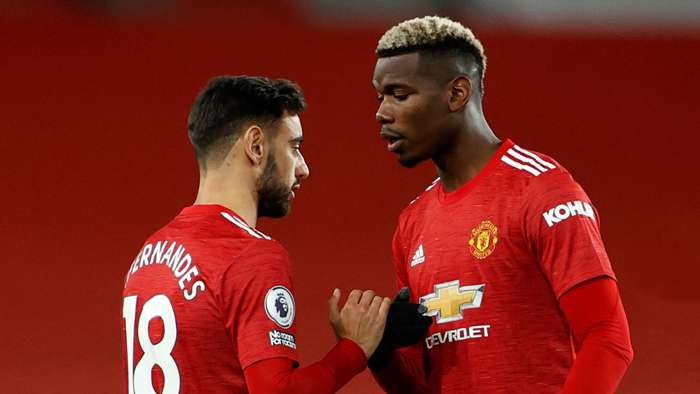 Bruno Fernandes remains puzzled by those who continue to doubt Paul Pogba’s ability and value to the Manchester United cause, with the World Cup winner catching the eye again in a 2-1 win over Aston Villa.

A lack of talent has never been an issue for Pogba, but delivering on a consistent basis for United has proved problematic at times.

On his day, the 27-year-old remains a match-winner, with the challenge being to showcase those attributes on a more regular basis.

Pogba did catch the eye on his most recent outing, as he won the penalty that allowed Fernandes to seal a narrow victory at home to Villa, and those alongside the France international are in no doubt as to how important he is to Ole Gunnar Solskjaer’s squad.

Portuguese playmaker Fernandes told the club’s official website after partnering Pogba in United’s engine room against the Villans: “I think today Paul was top. The first goal he makes a good skill, he comes off from a player so easily.

“But we all know the qualities he has. I think it is not in doubt.

“I hope people are not in doubt on the qualities of Paul because we know he can play, he can help us and he can play really well. He was involvedin both goals.

“In the penalty you see one of the best he can do, cover the ball and going away from his player, and I think he will give more and more and more with the confidence coming game after game.”

Victory over Villa has seen United draw level on points with Liverpool at the top of the Premier League table, with eight wins taken from their last 10 top-flight fixtures, and Fernandes believes the Red Devils are ready to deliver on expectation.

He added: “I think we are building something important. We know that. The most important for us is building a team. Building a group of players who take care of each other.

“Today it was Eric Bailly making a stoppage-time block before it was David de Geasaving that ball. The main thing is the group has to be together.

“As I sit in the stands in the last two or three minutes, everyone is shouting and hoping to don't concede a goal and to take care of the ball.