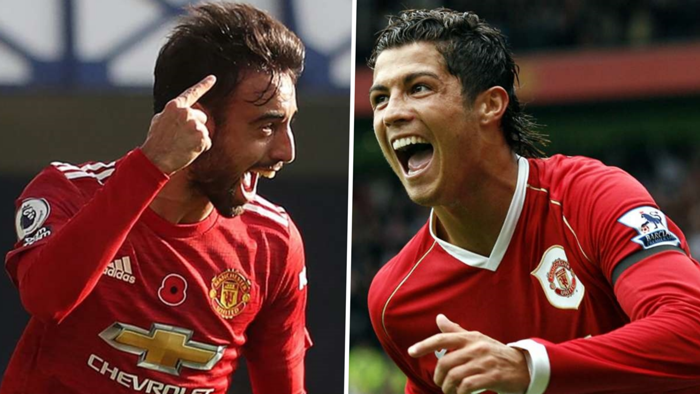 Bruno Fernandes says he would have joined Manchester United without the advice of Cristiano Ronaldo, but he was happy to listen to a fellow Portuguese before making a move to Old Trafford.

Tottenham appeared to be leading the chase for his signature at one stage, but Ole Gunner Solskjaer moved quickly in a time of need for United to get another creative influence onto his books.

Considerable value has been found in Fernandes, with the 26-year-old quickly becoming a talismanic presence for the Red Devils.

He is following in some illustrious footsteps in Manchester, with five-time Ballon d’Or winner Ronaldo seeing his star soar while representing United.

The current Juventus frontman was eager to nudge a countryman in the direction of Old Trafford once interest from Solskjaer emerged, but Fernandes says he needed no convincing.

He told NBC Sports of discussions with Ronaldo: “Yeah, I spoke with him because he knows the club better than me.

“He gave me some advice. It was important for me. I think I would have joined the club anyway but when you speak with Cristiano it's always better.

“We just spoke about the club, how it’s so big and how it would be good for me. The opportunity I would have to join such a big club. To have a chance to fight for my trophies. This is the biggest advice he gave to me.

“He said: 'Just go, enjoy it, you will love the fans, they will love you so just try to enjoy your game and the best of you will come'.”

Fernandes has thrived in English football, with his presence considered by many to have helped deliver the reversal in fortune that United are currently enjoying.

Across 47 appearances for the Red Devils, a classy midfielder has contributed 27 goals and 17 assists to the collective cause.