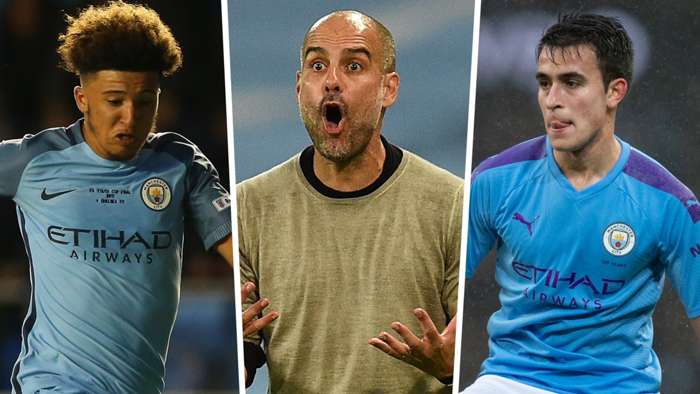 Phil Foden's role in helping Manchester City into the quarter-finals of the Champions League provided yetanother ringing endorsement for the club's academy system.

That represents a strong percentage of youth team players for a club that has invested heavily to build a first-team squad that it hopes can go all the way to the final in Lisbon.

But it was also a case of what might have been.

Teenager Eric Garcia would likelyhavestarted against Los Blancos had he not a dropped a bombshell in the days leading up to the game that he would not be signing a new contract with the club. Amove back to boyhood club Barcelona now looks likely.

Meanwhile, another highly-rated Spanish academy product, Brahim Diaz, was sitting on the visitors'bench after leaving the Etihad Stadium 18 months ago.

Jadon Sancho, another who played in the same City youth team, could be on his way back to Manchester in a €120 million (£108m/$141m) dealthis summer, but that is only if Manchester United can reach a deal with Borussia Dortmund.

It would appear to be a worrying trend that a number of star graduatesthat are coming through the academy are starting to look elsewhere, with Fodenthe exception to the rule.

As a diehard City fan, the 20-year-old has had to bepatient when waiting for his opportunities. But after showingdetermination on the training pitch and giving everything in 74 appearances - a number of which werejust shortcameos - he earned his starting berthfor the biggest match of Pep Guardiola'sseason.

The Catalan coachdoes not hand out appearances for nothing -each one has to be earned by showing you are better than the other, sometimes more senior options in your position.

Foden could easily have left the club - either permanently or on loan- but his resolve to become a legend at the club that he loves kept him battling for his City career.

Others have taken a different approach - some working out whileothers have not- and there is no guaranteethat leaving is a route to success.

Certainly Sancho can have no regrets about taking the bold decision to quit City, thoughhis departure was far fromstraightforward. The England internationalfelt he was ready for first team football and was notpreparedto wait any longer for his chance to impress.

When the winger was left out of a pre-season tour to the Unites States in the summer of 2017, he made his unhappiness clear by skippinga number of training sessions back in Manchester.

Sancho was eventually sold for €9m (£8m/$10m) - with a further 15 per centto come from any sale to United after he took the Bundesliga by storm.

His success prompted further exits from the Etihad to Germany - with mixed success. Wales international Rabbi Matondo has started to break into the starting line-up for Schalke, but others havefared less well.

Brahim's decision to leave was also fuelled by a wish to gainmore game time, but choosing Madrid was a curious call.

A year-and-a-half after his €17m (£15m/$19m) move to Santiago Bernabeu, the 21-year-old has played just 10 hours of football for the Spanish giants and seems further away from becoming a first-term regular than when he was at the Etihad.

Garcia is the latest to want away and probably the most frustrating for the City hierarchy.

The 19-year-old, who joined from Barca’s La Masia academy in 2017, has impressed youth coached and Guardiola's first-team staff alike with his maturity and intelligence.

With a long-term injury to Aymeric Laporte and inconsistency from John Stones and Nicolas Otamendi, Garcia has taken his opportunity to cement his place in the squad during the course of the 2019-20 campaign.

Following the Covid-19 shutdown, the 19-year-oldhas taken another leap forward and emerged as Laporte's most trusted partner - starting the FA Cup semi-final against Arsenal and Premier League clash with Liverpool.

His decision to reject a contract extension, then, has come as a shock, particularly after the trust and time that has been put into the young defender.

City have not given up hope that he may change his mind, with Barca seemingly unwilling to match their€33m (£30m/$39m) asking price this summer while there is potential for his career to stagnate while he sits out nextseason waiting for his contract to run down.

But Garcia's decision is also based on a desire to return to his boyhood club and the potential to be the long-term heir to iconic centre-back Gerard Pique.

It isa body blow to City and theirhopes to have a steady stream of players transferring from the academy to the first team, despite Garcia's exit potentially opening the doorfor another former youth team star Tosin Adarbioyo, who has a solid spell on loan with Championship side Blackburn Rovers, to break into Guardiola's group next term.

Garcia is unlikely to be the last to leave, either.

Highly-rated Dutch winger Jayden Braaf continues to be coveted by RB Leipzig, though the 17-year-old has trained with Guardiola's squad since football returned in June.

That comes 12 months after striker Noah Ohio turned down the chance to sign professional terms with City and instead move to RB Leipzig, where the Netherlands youth international has enjoyed a prosperous first campaign.