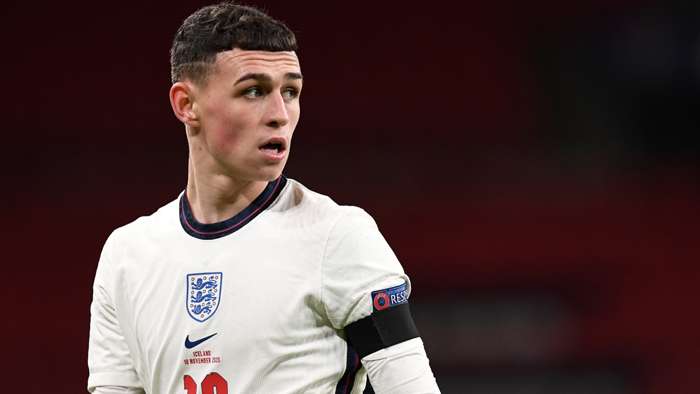 Manchester City midfielder Phil Foden says he is the most confident he has felt in his career as he targets a regular place for both club and country.

The 20-year-old earned his fourth England cap as a substitute against San Marinoon Thursday and is hoping to be a part of the squad for this summer’s European Championship.

He is also enjoying a fine run of form at the club level, where Manchester City are chasing an unprecedented quadruple.

Foden can add to his international caps in England’s upcoming World Cup qualifiers against Albania and Poland.

However, he also concedes that there is competition for places in Southgate’s squad and he doesn’t envy the choices facing the Three Lions boss.

“Its hard to get a place [in this team],” said Foden. “There are so many great talents in the attacking third, so I do feel sorry for him [Southgate] a bit having to pick 11. Its very difficult and all I can do is keep fighting for my place. Thats all I can do really.

“When you are in a good run of form, your confidence is always higher than normal so, yes, I feel full of confidence at the moment and I am really enjoying my games. So is this the most confident I have felt in my career? Probably… yes. Its hard to say unstoppable but I feel like I am full of confidence.

“Its really important to be consistent with your club. I want to just take that form into England. Some players in the past have struggled with performing for their clubs and with England as well, so I want to take the form and hopefully just play the same way. I want to do what I do best.

When Foden returns from international duty he will linkup with a Manchester City side all but certain to win a third Premier League title in four years.

They are also through to the Champions League quarter-finals, FA Cup semi-finals and face Tottenham in the CarabaoCup final next month as they target an historic clean sweep of trophies.

Despite being on the brink of history, Foden insists the squad remains grounded thanks to the calm leadership of boss Pep Guardiola.

“Pep is really good with that, trying to not think too far ahead,"added Foden. “He is always saying to everyone, ‘Just focus on the next game’. But, for sure, the lads are going to think about it of course. It could be one of the best seasons in Citys history if we pull that off.

“But all we get told is just to focus on the next game and just keep the same attitude. Hopefully we will win as many [trophies] as possible with City. Then, obviously, to play in the England team is the aim so it would be great times for me. Im looking forward to it – looking forward to the challenge.”