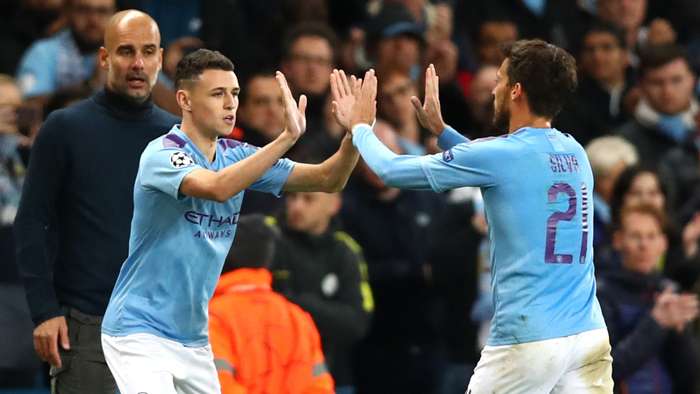 Competition for minuteshas both plagued and benefited Phil Foden during his career at Manchester City and now England.

Indeed, at 20 years old, many would'veexpected him to already have senior capsdue to his clear talents, but earning starts at club level hasn't come easily.

City boss Pep Guardiola has often opted for the experienced option but Foden has begun to earn regular starts and has been picked in some of his boyhood club's biggest matches in the last year.

After earning the trust of Guardiola, England have come calling and Foden could make his debut against either Iceland or Denmark in the UEFANations League.

At club level, Foden isn't shy to admit that he wants to take the place of his mentor David Silva next season.

"I am hoping so but there are a lot of midfielders still and a lot of quality in the team," Foden said about being given Silva's spot in the squad. "Guardiola is not going to just give me that position easily.

"Everyone has to train well and play well so it depends on me playing well enough to get that shirt. So yes, it is down to me. I am only 20 years old; A lot of people have been pushing it for me to play in the senior team much earlier but I haven’t played a lot of games at Man City.

"Recently, I have played a lot more and I have been doing well so I have had to work hard for the opportunity. Now I have got it, I am just trying to give it my best I can do and just enjoy it really. That’s what I am trying to do.

"I played in some massive games last year in cup finals and big Champions League games. They are the games that everyone wants to play in. Sometimes it is difficult for a young player to play in those games but I think he has been patient with me and played me at the right times. I am learning a lot and I feel ready to go."

From Stockport inManchester, Foden has provedthat English talent can make it in arguably the most competitive squad in English football. His breakthrough is important for the Citizens, who have faced criticism for losing talented youngsters like Jadon Sancho to Borussia Dortmund in the past.

Unlike his former youth team-mate, Foden stayed and he credits Silva, who left for Real Sociedad this summer, as his mentor.

"It is just what he sees that makes him so great, he sees the game so different from other players," Foden said of Silva. "How he moves into space in tight areas and how he receives the ball, never losing the ball, all these things, I have learned so much from him."

In linking up with England, Foden can have a reunion with Sancho who has become a regular for Gareth Southgate's Three Lions. Alongside Sancho, there is an exciting group of young players emerging with Manchester United's Mason Greenwood set to make his debut at just 18.

Foden is excited about linking up with stars from the England youth setup on a bigger stage in the next week.

"It will be great to link up with all the players because everyone has so much quality," he added. "It will be nice to play with Jadon again because I used to play with him in the Man City youth team.

"I first spoke to Mason Greenwood in the U-21s when he first came and ever since we have been close friends. For him to get that first call-up, I am really happy for him and it just shows that Gareth isn’t scared to throw him in even though he is 18.

"We have got a great coach in Gareth," Foden continued. "He gives young kids a chance if they are playing well enough and he is not scared to throw you in.

"The U-21s are full of quality, any one of those players can step up to the first team and I know that for sure but sometimes you have to keep being patient and working hard. I believe that some of the U-21s will step up one day, they just have to keep working hard, the step is there and it is not far off.

"Everyone wants the shirt in the England team; there are a lot of players that haven’t been picked this time that maybe will next time so it just shows that everyone is fighting for a place, it is healthy competition that can only make England better. It is a good thing for England and it can only be a good thing.