Football is back - and so is Salah! Liverpool make good on Klopp's promise to attack Premier League title 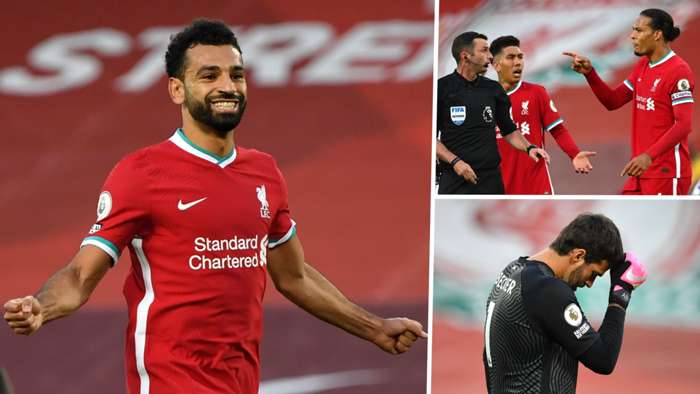 It only needs three words to sum up this game.

If this is a sign of things to come, then bring it on. The Premier League returned at Anfield, with not so much a bang as an industrial-scale explosion.

Welcome back to the big time, Leeds United.

If Liverpool wanted a game to illustrate just how difficult it will be to retain their league crown, then this was it. Marcelo Bielsa’s men, playing in the top-flight for the first time in 16 years, gave the champions an almighty examination, and an almighty scare.

Three times, Leeds fell behind. Three times, they picked themselves up off the canvas to land a right-hand of their own.

And three times, it must be said, they found that Liverpool’s chin is not what it once was. Jurgen Klopp has promised the Reds will attack their title defence, and on this evidence he was right.

They were irresistible at times going forward, but the less said about their defending the better. Certainly, this did not look like the division’s meanest, or more assured, backline.

Fortunately, though, they have Mohamed Salah. Break glass for emergencies. Liverpool broke the glass, Salah broke the net. Once, twice, three times. The Egyptian was magnificent, and finished the game clutching the match ball – only the fourth player in club history to do so in the first game of a league season, and the first since John Aldridge in 1988.

He likes a goal on the opening weekend, does Salah. He scored for Liverpool in 2017, 2018 and 2019, but he saved his best for 2020. He hasn’t looked this sharp for a while. Leeds, and the overworked Stuart Dallas in particular, could not handle him.

“Are watching a computer game here?!” Jamie Carragher, commentating forSky Sports, had asked during a madcap first half.

Liverpool were ahead inside five minutes, Salah winning and converting a penalty, but they were anything but convincing against a Leeds side that showed no inferiority complex whatsoever. Bielsa’s side came to attack, and they were rewarded for their adventure.

Jack Harrison, on loan from Manchester City, made it 1-1 and then Patrick Bamford, top scorer in the promotion campaign last time out, levelled after Virgil van Dijk had headed Liverpool briefly back ahead. Van Dijk’s error, too casual when dealing with a ball over his shoulder, summed up the home side’s mixed evening.

Salah, though, was as bright as a button. Time and again he spun away from Dallas down the Liverpool right. He was switched on, strong and quick, and when the ball dropped at his feet in the 33rdminute he unleashed the strike of the night, a left-foot thunderbolt into the top corner of the net.

Liverpool really should have killed the game after that, but found Roberto Firmino and Gini Wijnaldum wasteful in good positions. Salah kept plugging, kept pushing Leeds back, but the visitors found a third equaliser, and a well-taken one at that, when Mateusz Klich fired home.

Could they hold out? Could they even become the first visiting team to win at Anfield in the league since April 2017?

No, they couldn’t. Substitute Rodrigo Moreno, a big-money signing from Valencia, hadn’t read the script. He clattered into Fabinho, a Liverpool replacement, three minutes from time, allowing Salah to complete his hat-trick.

Relief all round for Liverpool, who know they will need to tighten up if they are to convince the doubters they can go again this season. They will hope, though, that it will be a while before a team comes to Anfield and does what Leeds did here.

The good news is that they start with three points, and three goals for their Egyptian King.

Mo Salah is at it again. Liverpool are winning again.