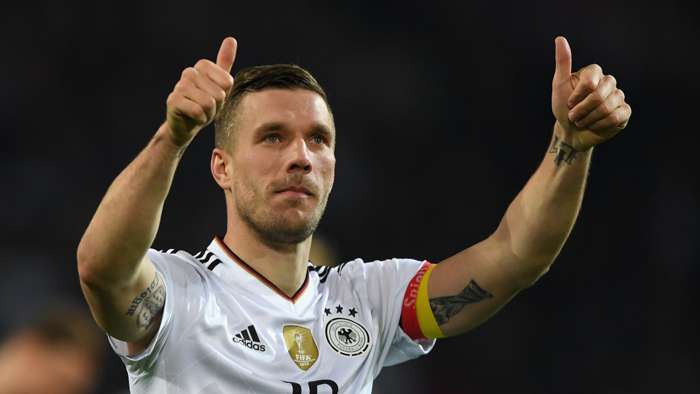 Former Arsenal and Germany star Lukas Podolski is set to tradein his boots for skates following a successful campaign to help his local ice hockey club.

He also made 130 appearances for Germany before retiring in 2017, scoring 49 goals and helping his side to victory at the 2014 World Cup.

But the forward, who was born in Poland but grew up near Cologne, could be set tomake a transition in his career, in aid of a local ice hockey club.

Podolski promised fans of Kolner Haie, one of Germany's biggest sides who are indire financial straits due to the Covid-19 pandemic, that if they purchased 100,000 virtual 'tickets' he would be unveiled as their latest signing.

The revenue from those sales is vital to Haie's future, as without it the club may not have been financially solvent enough to enter the 2020-21 season.

That mark was reached, and Podolski plans to keep his word, although he is yet to explain how he plans to juggle these new duties with his football career.

"I am extremely happy for the Haie, that we got the 100.000 tickets. I just want to say thank you to all the people and companies that helped us," Podolski beamed in a statement posted on the team's official website.

"Once everything is a little more calm we'll sit together with the club to see how this continues. Whatever it will look like: I am looking forward to being a Haie player."

Kolner added in their missive: "Last week, Cologne's world champion from 2014 came up with a crazy bet on his ice hockey club.

"His offer: 'If you break the mark of 100,000 #immerwigger tickets sold, I will become a Cologne Haie player.'

"Thanks to the great willingness of the Haie fans to support the association by buying #immerwigger tickets, this important brand has been created.