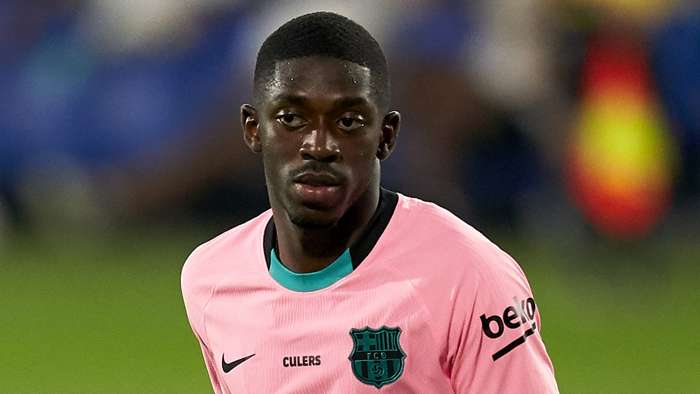 Ousmane Dembele has been challenged to iron out the “flaws” in his game, with France coach Didier Deschamps looking for the Barcelona forward to become more “efficient”.

Positive steps down that path have been taken this season, with theWorld Cup-winning 23-year-oldenjoying a welcome return to form and full fitness.

There are, however, still areas of his game that need to be worked on, with Deschamps among those looking for more potential to be unlocked in a player that boasts all the attributes of an elite performer.

The France boss told reporters after naming Dembele in his squad for the start of 2022 World Cup qualification: “Now he is able to play again, he is able to make the difference and score goals. He could score more and be more effective.

“It is not a question of changing him. He has been playing at the highest level for a long time. He is young. It would be good for him, for his club and for us if he could become more efficient.

“Of course, this is something that needs to be worked on. As you mature, you may make better choices. All forwards have moments when they are less efficient than others.”

Deschamps added: “Ousmane has and always had this ability to create chances and make the difference. He is not always decisive in the area. That’s where it’s most difficult.

“The important thing is his ability to make the difference. Yes, he can be more consistent from the beginning to the end of the game.

“I’m not saying he can’t progress or improve. I prefer to look at the qualities anyway. They all have little flaws that can be erased with time.

“Sometimes they don’t, but that doesn’t stop them from being good. We are talking about a player who has been at the top level for several years and he is still very young.”

Having endured his fair share of injury setbacks since making a big-money move to Barcelona in 2017, a spark has been rediscovered at Camp Nou this season.

Ronald Koeman has found a regular role in his plans for Dembele, with 35 appearances taken in as a result, and hehas registered nine goals and four assists.

Attention is now being shifted from domestic matters to international ones.

Dembele faces fierce competition for places in the France squad, but will be hoping to see some game over the course of the next fortnight inmeetings with Ukraine, Kazakhstan and Bosnia-Herzegovina.

If Dembele does figure across those fixtures, then a man who helped his country to global glory in 2018 will add to a cap collection that currently stands at 21.