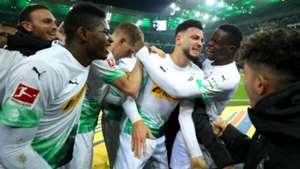 Borussia Monchengladbach will be looking to steal a march on their top-four rivals when they travel to the Schwarzwald Stadion to take on Freiburg in Friday's Bundesliga clash.

Die Fohlen are currently fourth in the table, two points behind RB Leipzig and four adrift of second-placed Borussia Dortmund.

Having run out 4-2 winners over this opposition in December's reverse encounter on home turf, they are 8/11 (1.73) favourites with bet365 to move into the top three by collecting maximum points here.

Christian Streich's team has taken just two points from 12 since the restart and is a 10/3 (4.33) outsider to come out on top in this clash.

Just one of the previous eight meetings between this pair has resulted in a draw, but you can get odds of 3/1 (4.00) on them cancelling each other out on this occasion.

Robin Koch will face a late fitness test after going off with a back injury against Bayer Leverkusen last time out, with Janik Haberer and Yoric Ravet also doubtful.

Tobias Strobl, Fabian Johnson, Raffael and Denis Zakaria are all ruled out, while Breel Embolo remains a doubt with the ankle injury that has kept him out of the last two matches.

Having gone into December's meeting just three points behind their opponents and flying high in fourth, Die Breisgauer are now 18 points adrift and on the brink of dropping out of the top 10.

This is due to a run of nine defeats and just four wins in 17 matches, collecting only 16 points from a possible 51 and losing five out of seven on home turf.

In contrast, Marco Rose's men come into this clash on the back of just two defeats in 11 and unbeaten in five on the road - winning three of the most recent four.

On current form, those 8/11 (1.73) odds look well worth backing on Borussia Monchengladbach coming out on top against an out-of-sorts Freiburg.

You can watch the Bundesliga live on the go with your iPhone, iPad or Android device through your bet365 account. All you need is a funded account or to have placed a bet in the last 24 hours to qualify.