From learning the ropes to the world’s leading left-back: The incredible rise of Alphonso Davies 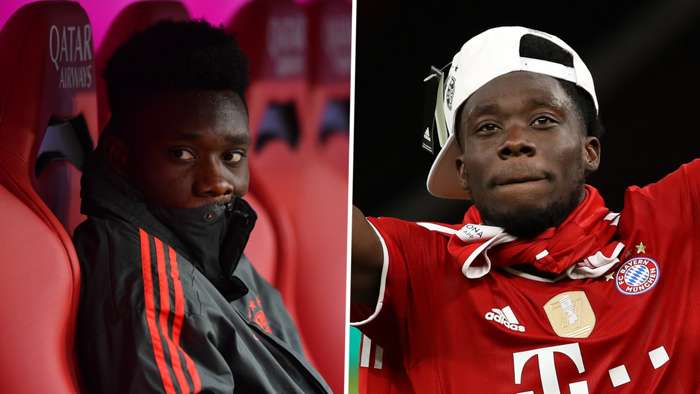 Alphonso Davies has several natural gifts,seemingly magical powers that have made his meteoric rise seem effortless.

There isthe dribbling ability that sees the ball stay glued to his feet as he dips and dives past helpless defenders.

And there isthis superhuman ability to adapt and rise to the occasion.To date, there has notbeen a single moment that has phased him, no matter the stakes.

Those abilities have seen Davies turn into something of a sensation.

He dominated MLS and the Bundesliga while still a teenager. He hascollected two German league titles and a Champions League trophy, earning a total of seven pieces of silverwaresince moving to Bayern.

He hasbeen the Bundesliga Rookie of the Year, a Champions LeagueBest XI selection, a UEFA Best Defender nomineeand now a member of this year'sGoal 50.

Daviesonly just turned 20 at the start of November.

It has all seemedso straightforward, so easy.

But while Davies'rise has been meteoric, it hasalso been carefully calculated. His surge from MLS prospect to Champions League star came largely because so many believed in him, thoughhe admits that he did notalways believe in himself.

"You might have read some stuff about me sometime in the last few years," he wrote in the Players' Tribune. "Like when I was 15:Davies becomes second-youngest player to play in MLS.Or when I was 17:Davies makes record-breaking transfer to Bayern Munich.

He added: "My dream was to become a big player in Europe. But most of the stars there are either from Europe or places like Brazil and Argentina.

"How many come from Edmonton, where you’re only supposed to play hockey? None. So yeah, I had a lot of doubts. I wondered if I had gone as far as I could."

At this point, Davies' origin story is fairly well-known.

The son of Liberian parents, Davies' family movedto Ghana and, eventually, Canada during theSecond Liberian Civil War, a conflict that displaced more than 450,000 people. Despite his humble beginnings, he was talented enough to earn a place with the Vancouver Whitecaps academy by the age of 14.

And that iswhere the whirlwind started. By the age of 15, he was playing in MLS, becoming the youngest player to make an appearancesince Freddy Adu.

By 2017, Davies was a regular, scoring three goals in 33 appearances in all competitions. In 2018, he was an MLS All-Star and one of the best young talents the league had ever seen.

Soon after, Bayerncame calling. There had been interest from Chelsea, Liverpool and Manchester United, with the latter turning down several chances to sign the Canadian star.In the end, Bayern won out. They are lucky that they did.

The Davies that arrived in Germany is very different to the one that is now a key to Bayern's present and future. That version of Davies was a talented young winger, a player with the ability to beat his man and, on occasion, make a play in the box.

This version of Davies, though, is a defensive terminator; a player that putall of his gifts to full use within weeks of first playing the full-back position.

Bayern are perhaps the best team in the world at fashioning players into something entirely new. PhilippLahm bounced from full-back to midfield and back again when convenient. Joshua Kimmich, Lahm's heir apparent, does the very same. David Alaba shifts from full-back to central defence and then jets off to play as Austria's No.10 during international breaks.

For Davies, his true coming-out party as a world-class left-back,came in the Champions League against Barcelona.

Before that infamous 8-2 bloodbath, Davies was that 'Bayern fella that ran really fast'. Butby the time he whisked past Lionel Messi and then Arturo Vidal and then Nelson Semedo before firing a pass to Kimmich that you, the reader, could have tapped home, he had grown into a star.

“He’s got the best players around him and quality coaching but he deserves all the credit because he’s a fantastic player and a phenomenal young man," said former Whitecaps coach and Wales international Carl Robinson.

“The way he went past Semedo from a standing start reminds me of a young Ryan Giggs, who was that quick over just three or four yards. The way he didn’t rush into his decision making for the goal showed why he’s at a huge club like Bayern Munich. That was brilliant.

“His positioning and footwork will improve with experience, but Ashley Cole at the same age wasn’t the perfect defender and Gareth Bale at 21, playing as a left-back turned into awinger atTottenhamhad developing to do too.

“Alphonso has a kick-start on these boys because he’s playing at such a high level, a year or two before them."

AndyRobertson of Liverpool, widely seen as one of the best attacking full-backs in the world, admitted that even he cannot do some of the things that Davies can.

Marcelo, the best left-back of a generation, says that Davies' play brings tears to his eyes.

The biggest compliments Davies can receive do not come from former team-mates, coaches or pundits; they come from his peers, his rivals, many of whom admit that they like what they see.

This story is nowhere near over, though. Davies is just 20 years old, even if it is easy to forget that fact given how long he hasbeen on the North American scene. He hashad his struggles this season, earning criticism from Hansi Flick before suffering an injury.

He may just be the world's best left-back. He may not be. Several of his peers haveput him in that conversation, but that discussionis subjective. It isadebate.

But the talent? That isthere. The work ethic? That too.

“When I first came to Germany, it was a learning experience for me, I knew the quality players they had on this team,” Davies said, according to the Edmonton Sun.“Being able to play regularly, I was just trying prove myself and show that I’m able to play at this level.

"Me winning the league, me winning the Pokal (German Cup) and then the Champions League, it’s an amazing feeling for me being so young and doing it so early in my career.

“Has it sunk in? I would say not yet, but it’s definitely getting there. I still can’t believe all this is happening.”