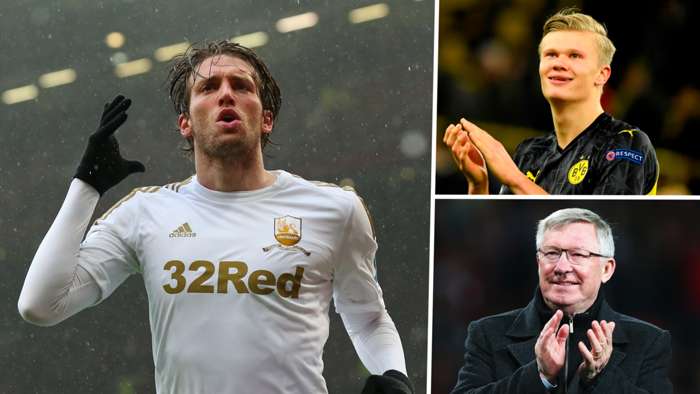 Few players have ever taken former Manchester United managerSir Alex Ferguson by surprise, butMichu can count himself among them.

After a single season in La Liga withRayo Vallecano following a few lacklustre years in Spain's second division, thestriker was brought to England in 2012 by Swansea managerMichael Laudrup and quickly defied all expectations.

On his Premier League debut, Michu scored twice and claimed an assist in a 5-0 win awayagainst Queens Park Rangers. The goals wouldcontinueto flow that season as he finished the 2012-13 league campaign with 18 strikesto his name.

The Spaniard's electric form in front of goal would prove even more crucial in the League Cup that yearas he helped fire Swansea to an unlikely piece of silverware.Michu struckin their surprise semi-final victory against Chelsea, before also finding the back of the net in a5-0 win over Bradford City in the final.

As faras debut seasons in England go, they don't come much better, and Ferguson was one of many that was left surprised by Michu's rise.

"I had never even heard of himbefore he came to Swansea. In fact, I think I am going to have a word with our scouting ­department!" the Red Devils icontold reporters at the time.

Swansea signed Michu for just£2 million ($2.6m) in July 2012 but even that feeseemed like a gambleon a player who had managed just six goals across the 2010-11 season while playing in theSegunda Division.

Though the 6ft-tall attacker showed plenty of promise the following campaign as he made the step up to La Liga, netting 15 times in Spain's top-flight, the decision to bring him to England seemed a riskyone.

For Michu, however, who began his career playing in his country'sfourth-division with Oviedo, this was his chance to shine in a league he had long admired.

Across the 2012-13 season he found career-best form when it mattered most -earning his one and only Spain cap in the process.

"Inafootballing sense, that was the best year I could have had. I scored 22 goals and lifted a cup at Wembley, then in the league we beat Arsenal at the Emirates Stadium and I scored twice," Michutold FourFourTwoin August.

His form was so good in fact that reports began emerging that the likes of Barcelona,Real Madrid and Arsenal were even circling.

“I’m not sure I could have reached either Barcelona or Madrid’s level. But at Arsenal, after 22 goals for Swansea, I could have offered something," he added.

Sadly, any hopes of becoming a Gunner or even continuing his fairytale with Swansea very quickly came undone with successiveinjuriesspoilinghis second season in the Premier League.

Looking for a fresh start, Michu secured a surprise loan move to Napoli in 2014, only for injuries to once again strike as he was limited to six appearances andno goals for the Italian club.

In the blink of an eye, the striker had gone from hot property to discarded as Swansea let him leave the club permanently in November 2015. He thenfound himself back in Spain's fourth division, where his career had begun, all before the age of 30.

His storywould have asilver lining though as he signed for boyhood club Oviedo in 2016 for what would be his final season as a footballer. While the goals never flowed freely for Michuagain, he managed to strike just once across 27 Segunda Division appearances, it at least gave him the chance to bidfarewell the game that had all too briefly made his dreams come true.

In his retirement message in 2017, Michu wrote with a heavy heart: “According to medical reports, the current situation of my right ankle has come to a point where it has forced me to saygoodbyeas a professional football player today. Even though I am saying farewell to you with so much sorrow, I know that we will always be united.

"I thank you from the bottom of my heart for all the magical moments that you have given to me during all this time. I feel privileged to have fulfilled a dream that is shared by so many of us since childhood. The dream of becoming a professional player in this sport.

"Because of you, the public have given me an invaluable affection that I will never be able to repay. Indeed, I feel I have done nothing to deserve it all."

While Michu was the proverbial candle that burned too brightly, his fleeting heroics in front of goal will never be forgotten by Swansea fans nor it seems by some of the game's brightest prospects.