From talent of the century to Arsenal bit part: Whats going on with Martinelli? 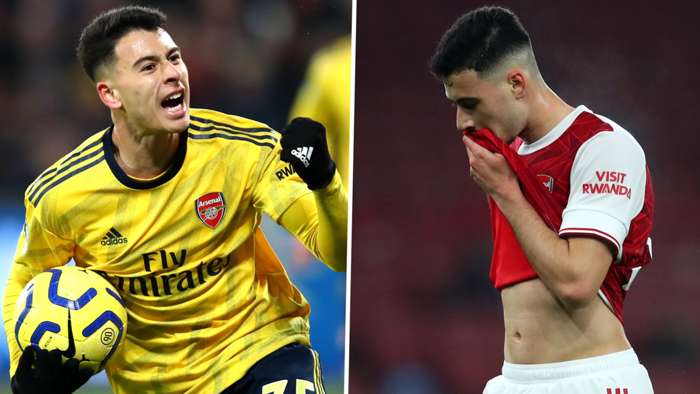 It has now been two monthssince Gabriel Martinelli was replaced at half-time during Arsenal’s 0-0 draw against Manchester United.

Since then, the Brazilian teenager has managed just 31 minutes for the Gunners, with his two substitute appearances against Olympiacos and West Ham last week adding to one fleeting showing off the bench against Benfica last month.

A player dubbed the ‘talent of the century’ by Liverpool boss Jurgen Klopp just over a year ago following his thrilling start to life in north London, suddenly finds himself on the outside looking in as the Gunners try to salvage something from what has been a disappointing season .

“He is a player that is going to give us a lot, but we need some time to find the right games for him and the right connections on the pitch so that he can do what he does best,” said Mikel Arteta, while explaining Martinelli’s recent lack of game time.

“The way he is and the way he trains every day, he is going to be a really important player for us, no doubt. But when you have many options, it is difficult when you look for certain qualities in certain games.”

Martinelli exploded onto the scene when he arrived at Arsenal in the summer of 2019, surprising even those who had fought so hard to bring him to the club from Brazilian fourth-tier side Ituano.

The 19-year-old was a relativeunknown when he arrived, though he had been looked at by several clubs, including Manchester United and Barcelona, before Arsenal decided to take the plunge.

When he joined, the expectation was that he would initially be part of the Under-23s, but such was his form during pre-season that he made his debut as a late substitute on the opening day of the Premier League campaign against Newcastle.

He would go on to score seven goals in his first seven appearances in all competitions, and after scoring twice in the 5-5 draw with Liverpool in the Carabao Cup in October, 2019, he was the top scoring teenager across all five of Europe’s top five leagues. He also equalled a record set by Ian Wright of scoring in each of his first four Arsenal starts.

“Martinelli’s a talent of the century, he’s an incredible striker,” said Klopp in the aftermath of the game at Anfield.

But since then, the Brazilian has scored just three goals in 29appearances, with his only goals under Arteta coming in the 1-1 draw with Sheffield United in January last season and in the 2-2 draw at Chelsea three days later.

That stunning solo strike at Stamford Bridge, which won Arsenal’s goal of the season award, remains the last goal the young Brazilian scored for the club - although a serious knee injury did curtail his debut season in England early and rule him out for nine months .

Since he has returned to fitness, Martinelli has gone 10games without a goal this season and has yet to complete 90 minutes once since the start of the campaign.

A player who burst onto the scene in such explosive fashion, earning himself sixth position on the 2020 NXGN list of footballs top teenage talents, now finds himself near the back of the pecking order under Arteta.

“If anything, its my fault,” said the Arsenal boss, when quizzed on Martinelli’s lack of game time ahead of last week’s Europa League clash with Olympiacos.

“Gabi has done everything perfect, he trains incredibly well every day and his attitude cannot be any better. He is disappointed he is not playing more obviously and I have spoken to him, but he needs to be a little bit patient.

“He’s had some minutes, he had some games as well and its true the competition for the front positions is very tough. But he needs to be patient and he will get his chance.”

The difficulty for Martinelli now, however, is that it istough to see where those opportunities are going to come from between now and the end of the season, giving how key some of his senior team-mates have been to Arsenal’s upturn in from since Christmas.

Pierre-Emerick Aubameyang has started scoring again, although he has struggled in the recent games against Olympiacos and West Ham. Alexandre Lacazette, meanwhile, has found the net nine times in his last 19 appearances in all competitions when he hasbeen called on to lead the frontline.

And on the left side of the attack, another position in which Martinelli can operate, Willian has finally found some form and Nicolas Pepe is showing genuine signs of hitting top gear, having been shifted to that side to accommodate the brilliant Bukayo Saka on the right.

So for Martinelli, the possibility of some prolonged game time in the coming months looks bleak.

“I think everyone has raised their level in recent weeks," Arteta said, when discussing the new found competition that exists within his previously misfiring squad.

“After Christmas I think the front players are giving us something different. Laca has had some good spells as well, Pepe the same and Willian deserves credit because of the way he trains every day and is trying. In games now you can see that he is starting to produce what we think he can do for the team.

“Everyone has to step up and create big moments because the front players in the end have to be the ones that decide the game for us.”

It isa difficult situation for Martinelli and one that is not dissimilar to the issues facing some of the other youngsters in Arsenal’s squad right now.

Reiss Nelson has not featured since the FA Cup success against Newcastle in January and Eddie Nketiah has amassed just 10 Premier League minutes during two brief substitute appearances against Crystal Palace and Manchester United in 2021.

Both had featured heavily during the opening months of the campaign, but have now seen their seen game time drop dramatically since the end of the EuropaLeague group stage and the switch to 4-2-3-1 following the defeat at Everton on December 19.

“Those players need opportunities, but they need to deserve those opportunities,” said Arteta. “I think in recent months you have seen a lot of individuals increase their levels of performance and as managers, it gives us the problems that we want.”

Arteta is a manager who craves discipline from his players. He likes structure and does notlike to deviate from his game plan. That’s clear from the way he consistently coaches his players through games, telling them exactly where they should be and when.

Martinelli, however, is a player who plays off the cuff. While his incredible workrate is something Arteta will like, his penchant to charge around and vacate his position is perhaps one reason for his lack of game time in recent months.

Heremains a crucial part of Arsenal’s future plans, however, as the long-term contract he was handed in July while he was out with a knee injury highlighted .

There are suggestions Arteta is using this period to turn the Brazilian into an out an out central striker , with Martinelli hinting at that recently when he posted some videos on social media of himself working on individual finishing drills with the Arsenal coaching staff at London Colney.

Arsenal’s manager has had some notable success turning talented young attackers into top class forwards in recent years, with the impressive development of Raheem Sterling at Manchester City something he is often credited with.

So although his frustration at a lack of game time is understandable, Martinelli is in good hands with Arteta.