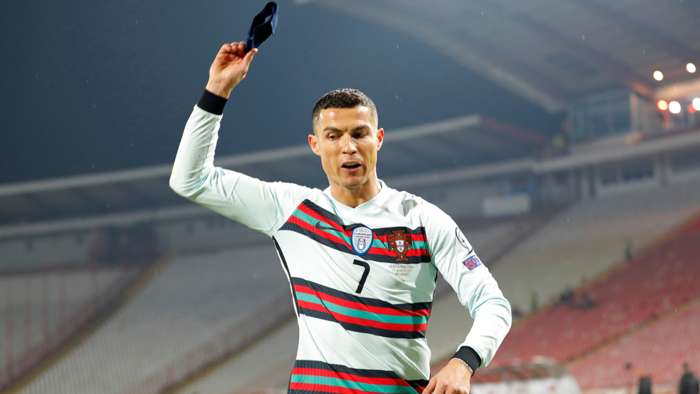 Portugal captain Cristiano Ronaldo tore off his armband in anger and went straight to the dressing room after seeing his last-minute winner against Serbia ignored in Saturdays World Cup qualifier.

The Juventus ace thought that he had salvaged victory for the visitors after they had squandered a two-goal lead.

But his strike was wrongly deemed to have not crossed the line, leaving a relieved Serbia to celebrate a 2-2 draw while Portugal raged at the match officials.

Having opened their qualifying campaign with a 1-0 win over Azerbaijan, the reigning European champions were hoping to make it six points out of six on Saturday.

Diogo Jotaproved key, scoring both goals to put the Selecao comfortablyahead before half-time.

Serbia did not give up, though, netting through Aleksandar Mitrovic andFilip Kostic after the break to level the game.

All those efforts, though, looked set to end in vain when Ronaldo squeezed the ball over the line in the dying seconds, despite Mitrovics desperate efforts to clear.

But while television replays showed that the ball had clearly crossed, no goal was forthcoming; and Ronaldo, who had already wheeled away in celebration, began remonstrating with the linesman while play continued around him.

The forward earned a yellow card for his troubles and stormed off the pitch even beforethe final whistle sounded, tossing his captains armband onto the floor for good measure.

Such incidents have been largely consigned to the past in elite football due to the advent of goal-line technology.

The system, which helps officials determine whether the ball has fully crossed the line, first appeared at the World Cup in 2014 and even earlier in certain national leagues, although UEFA were slower to adopt it, finally usingthe technology for Euro 2016 and the following Champions League campaign.

Neither goal-line technology nor VAR are in place in the qualifiers, however, meaning Ronaldo continues to seek his first goal of the campaign after also drawing a blank against Azerbaijan.