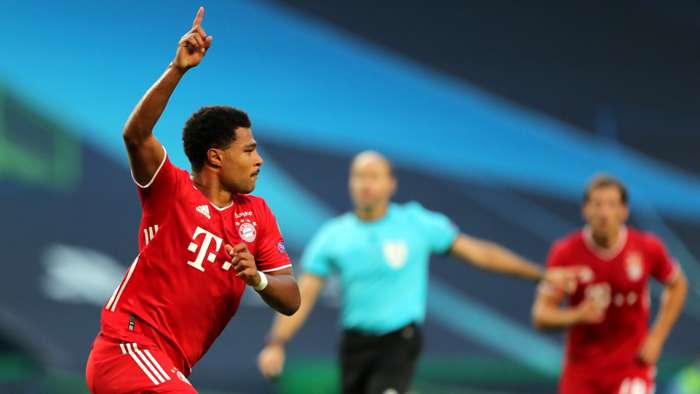 Bayern Munich starSerge Gnabry has admitted that his side were lucky to see Lyon miss several good chances early in Wednesday's Champions League semi-final, which the Bavarians won 3-0.

Gnabry scored an excellent solo effort from the top of the box just a minute afterToko Ekambi hit the post, before scoring again to round off a first-half brace.

Robert Lewandowski would add a third late to give Bayern a three-goal win and push them into Sunday's final against PSG.

Though the final margin wascomfortable, Gnabry knew that things could have turned out different had Lyon managed to take advantage of their early pressure.

"Lyon put lots of pressure on us. They had some chances and we were lucky at the beginning," Gnabry told DAZN before looking ahead to Sunday's final.

"On Sunday we will give everything to get the cup. It would be the icing on the cake of a super season for us."

With his brace,Gnabry has nowbeen directly involved in 11 goals in the Champions League this season (nine goals and two assists). Only Lewandowski with 20 has had a hand in more.

Speaking to RMC Sport after the match, Toko Ekambi rued his inability to give his side an early lead and said he felt that Bayern were there for the taking on the night.

“We thought we could have done better butwe missed opportunities, me incuded," the forward said. "This Bayern side was not unbeatable because we had the chances.

"We played well but we knew we were facinga great team. The first Bayern goal hurt us but we continued to play. There are evenings when you have itand evenings when you don't, and the latter was the case today.