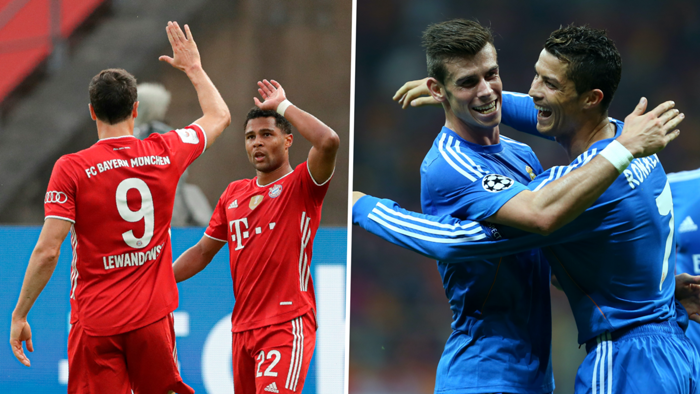 The German winger fired home Bayern's first goaljust moments after seeing Lyon hit the post at the other end, giving the Bundesliga side a 1-0 advantage in the 18th minute.

He found the back of the net again just 15 minutes later, pouncing after Lewandowski was unable to fire home a cross from Ivan Perisic to double the Bavarian side's lead.

The goal was Gnabry's ninth Champions League goal of the season, with the German international scoring four goals against Tottenham and two goals against Chelsea as part of that run.

Mario Gomez is the only German player to have scored more in a single Champions League campaign, with the former striker firing 12 goals during the 2011-12 Champions League as Bayern fell to Chelsea in the tournament finale.

Bayern went on to win the title a year later in what was their most recent triumph in Europe.

Lewandowski went on to add a goal of his own late in the match, heading home from a set-piece in the 88th minute to all but seal Bayern's spot in the final.

Gnabry and Lewandowski have been Bayern's two top scorers, with the duo now combining for 24goals in the competition.

Those 24goals have seen the duo surpass Ronaldo and Bale, who fired 23 times between them during the 2013-14 Champions League campaign.

Real Madrid took down Atletico Madrid in that season's final, with Ronaldo scoring 17 goals throughout the competition and Bale chipping in a further six.

Bayern, though, have a chance to be even more prolific than that Real Madrid team, as the German side became only the fourth team in Champions League history to reach the 40-goal mark in one competition.

Paris Saint-Germain booked a spot in the final on Tuesday by taking down RB Leipzig, with the French side sealing a 3-0 win to advance to the Champions League final for the first time in the club's history.