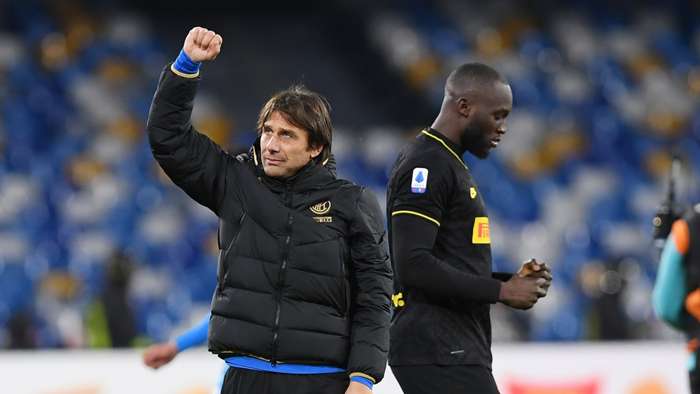 Although the former Juventus boss knows his team will befacing Europa League specialists, who won the competition in three consecutive years from 2014 to 2016, he is confident Inter can triumph in Cologne.

Speaking in a news conference ahead of Friday's game, Conte said Inter would have no fear of the opposition, declaringhis team have grown "braver" over the first season of his reign.

"What I've realised is that people only remember when you win finals.

"I won the Champions League but Ialso lost a further three in the final. The people who leave their mark on history are those that win those matches and trophies."

Inter crushed Shakhtar Donetsk 5-0 in Monday's semi-final, teeing up a shot at a Sevilla side who battled past Manchester United.

"We should be proud we've reached a European final for the first time in 10 years," Conte said.

"But history is written by the conquerors, the winners. History will only record ultimately the team thatwins this season's Europa League.

"It's a shame but equally that's added motivation for us."

Conte, a three-time Serie A champion ascoach ofJuve and Premier League winner at Chelsea,said he took the Inter job only because he sensed there was a chance of silverware.

He stressed he always needs to be sure there is a sniff of success before taking a job, even if it amounts to just a one per cent possibility. Now the chance of a first trophy at Inter is far greater.

"All the players, the staff, the kitman, the groundsmen, all of them have that feeling and that percentage has only grown day in, day out becausethe players are very willing to work hard," said Conte.

"They've got a lot of desire to improve. They want to lead from the front this season and achieve something. Credit goes to the players and my perception has grown day in, day out working with these players.

"All of them bought into the work we did and became braver as the season has gone on. The braver we became, the greater scope we had to go on and win a big trophy like the Europa League.

"We need to make the most of the opportunity."

Asked about the potential fear factor involved in facing a team such as Sevilla, Conte said: "I don't use the word 'fear'. I don't want my players to have it in their locker either.

"We really rate the opposition and we rate their history in this competition.