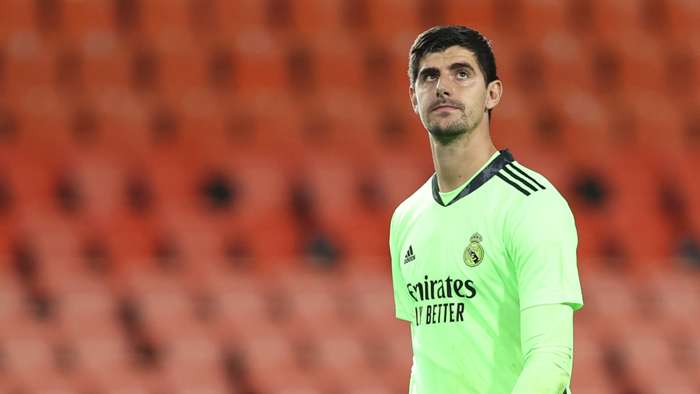 Thibaut Courtois questioned the use of VAR in Real Madrid's heavy loss to Valencia and claimed opposition forward Maxi Gomez bought his side one of their penaltiesby "screaming".

Lucas Vazquez and Sergio Ramos were penalised for handling the ball inside the box, either side of Marcelo being punished for bringing down Gomez.

Courtois kept out the first penalty before it was retaken because of encroachment and was also beaten by a Raphael Varane own goal in Sunday's clash.

Soler is the first player to score three penalties in a single LaLiga game thiscentury,but Courtois claimed Madrid were hard done by, particularly with the second spot-kick.

"Maxi screams more, and the way VAR gives penalties..." he said. "We had three penalties against, and the second goal was bad luck.

"I think we started well. Sometimes it happens to us that we don't move up the pitch together and we get caught out a little at the back, but Valencia haven't created chances.

"The first penalty is a penalty – it's bad luck. I don't know why it was retaken. The second goal is also bad luck. At half-time we were motivated to turn it around. As soon as Istarted,I make a save that goes onto the post and then two penalties."

There was also some controversy surrounding Valencia's second goal as a lengthy VAR check was needed to check for a possible Denis Cheryshev foul on Marco Asensio.

"There was a foul on Asensio in the build-up," Courtois said. "I heard him say it in the changingroom,but you can't change anything there."

Madrid's defeat was their second in four league games, the other coming againstnewly promotedCadiz, but Courtois reiterated that it was down to bad luck more than anything.

"We had chances to score, but the ball did not want to go in," he said. "We have to show the unity we did just after quarantine when we were barely letting in goals.

"There are some players who were not available for us but those who played have done well. Now is a good time to leave this game behind. Difficult games are coming."

Vazquez, who made more tackles (four) and clearances (three) than any Madrid player, acknowledged the importance of learning from the humbling defeat.

"It was a tough game and we've got to improve," saidthe makeshift right-back. "As a team, we came into the game on the back of several pretty good performances in which we performed to our best.