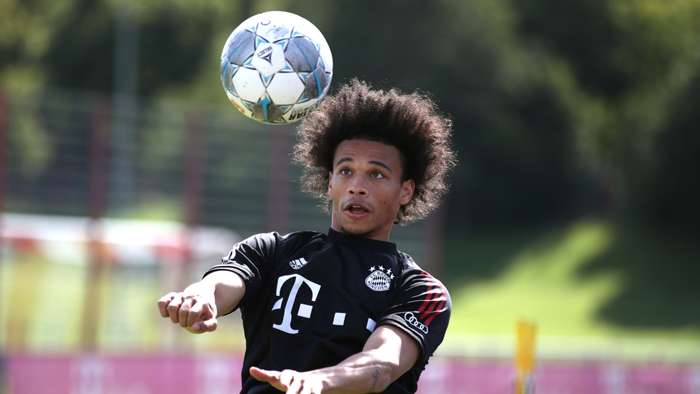 Leon Goretzka says he is looking forward to playing alongside Leroy Sane at Bayern Munich.

The 24-year-old winger has played in only one competitive match in the last 12 months, having madea 10-minute cameo in a Premier League game against Burnley after he recovered from an cruciate ligament injury.

Goretzka played alongside Sane at Schalke and is looking forward to reuniting with him at the Allianz Arena.

"I'm very happy about it.Leroy and I have known and valued each other for ages," he told Sport1. "We both come from Bochum, from the Ruhr area.In our youth we played together in the youth system.Now we're both playing for Bayern.That's great."

Goretzka, 25,joined the German giants in 2018 and played a key role in their domestic and continental treble success last season, scoring eight times in 37 appearances in all competitions. The Germany international has been impressed by the club's mentality, but stressed they must keep improving to stay ahead of their rivals.

"It's very uncomfortable to play against us and even more difficult to win against us," he said."Our intensity in the game and our pressing against the ball have worked very well recently.Almost all teams had a hard time with that, which often led to us winning the ballin the opposing half.

"What particularly distinguished us after the restart was the mia san mia we are who we are mentality.This has distinguished Bayern in the past, and we have raised it to a new level.It makes you want to play in this team.If you look into their faces in the dressing room before the game, you know: it's about to go.

"What is good today canno longer work a week later.We are now the hunted in all of Europe.The opponents will deal with us even more intensively and try to decipher our system.We will try to make our game even more diverse and to develop further."

He continued: "We'll need a deep squad, especially this season.You just have to look at the calendar.We won everything there was to be won with the last squad.That was a top squad.We have competent people in the club who deal with it around the clock.We trust them 100per cent.