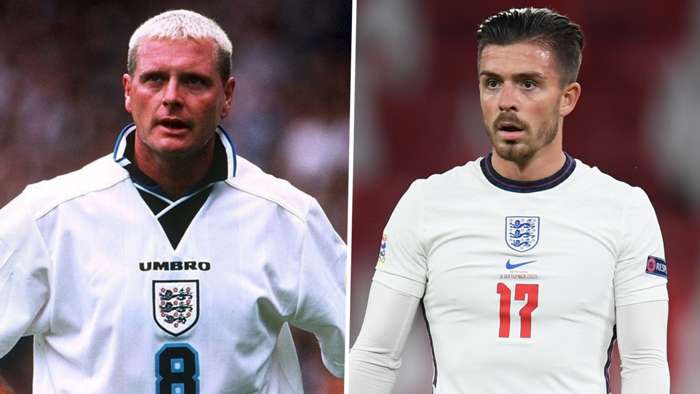 Jack Grealish has the same “natural ability” as England legend Paul Gascoigne, claims Bryan Robson, with the Three Lions considered to have found another playmaker that can excite supporters.

The odd question has been asked of his ability to compete at the very highest level, but those doubters have been silenced in style over the course of the last 18 months.

Grealish has become a Premier League star at Villa, with a series of talismanic displays keeping them in the top-flight and earning their skipper a lucrative new contract.

There has also been plenty of transfer talk and a breakthrough into the senior England squad.

An international opportunity has been grabbed with both hands, as his creative qualities are showcased on the grandest of stages, and Robson believes the efforts of an icon can be emulated.

The former England captain told The Sun ahead of the Three Lions’ final UEFA Nations League clash of 2020 against Iceland: “No English player in recent years has excited me as much as Grealish does.

“It’s the way he glides past people, his range of passing, he’s so pleasing on the eye.

“Grealish is always on the front foot, always looking to create. It’s what Gazza loved doing, using his ability to go past defenders on both sides, scoring great goals, pleasing the crowd. And some of Grealish’s goals have been outstanding.

“You can see that, just like Gazza, he loves what he’s doing in being able to manipulate the ball. Grealish has got that natural ability the same as Gazza. It’s what sets them apart from the rest.”

Manchester United great Robson added: “Gazza’s strength was to go past players on either side. He had this unbelievable knack of pushing you in the chest, then accelerating away from you — by actually fouling you first.

“Grealish does it differently but it’s the same result and can be devastating.

“He’s got massive leg muscles, calf muscles especially and that makes him very quick. That allows him to go either side and then like Gazza did, he’s away.

“It’s the little things, the minor things if you like, that are really important to be a top player. They are minor but they are magic because other people can’t do it.