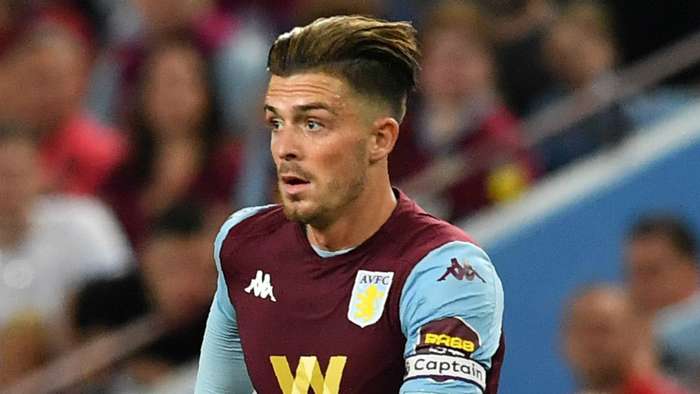 Jack Grealish's England chances won't be helped if he joins Manchester United, according to John Barnes.

Grealish was called up to Gareth Southgate's Three Lions squad for the first time last week ahead of a UEFA Nation's League double-header against Iceland and Denmark.

The Aston Villa playmaker was initially left out of the final 24-man group, but was drafted in after United forward Marcus Rashford withdrew because of an ankle injury.

Grealish enjoyed a stellar 2019-20 campaign at Villa Park, as he proved to be the inspiration behind the club's successful Premier League survival bid.

The 24-year-old's superb performances for Villa have seen him attract interest from a number of high profile potential suitors, with the Red Devils thought to be leading the race for his signature.

However, Barnes has warned Grealish against moving to Old Trafford due to the likelihood of increased competition for places within Ole Gunnar Solskjaer's ranks following the arrival of Ajax midfielder Donny van de Beek.

The ex-England star thinks the Villa star should stay put if he wants to become a regular at international level, as he told BonusCodeBets: "Would stayingat Aston Villa or leaving for a biggerclub like Manchester United help Grealish's chances ofwinning more caps?

"I don’t think that going to Manchester United or a bigger team will help his England chances at all.

"Playing for a bigger club should not mean you have a more likely chance of being in the England team.

"Being at a bigger club and playing regularly in the Champions League, playing well and scoring goals will help you, but Jack Grealish will not be the number one player at a team like Manchester United."

Asked if Southgate made a mistake by not including Grealish in his latest squad to begin with, Barnes responded:"Southgate obviously felt that there were other players who were ahead of him and he put them in and it was not a mistake to leave him out or call him up now.

"Jack is 24 and a good player, maybe he feels why he has been missing a call up is because England have a lot of attacking options in those positions.

"That is not to say that he isn’t a good player, but he has to consider the balance of the team, the balance of the squad, and with the players dropping out he felt it was right to call Grealish up, so it was not a mistake to begin with to not call him up because Gareth has to make the tough decision about who are his best players. I’m glad to see him being called up."

The former Liverpool captain went on to admitthat Grealish has a tough task on his hands to break into England's starting XI ahead of next summer's European Championships given their strength in depth in forward positions.

"You’ve got Mason Mount, James Maddison, Raheem Sterling, Jadon Sancho, all these players that can play in attacking areas," Barnes added."It is unfortunate for Grealish that England has a wealth of attacking midfield players and wide players, which is where he will play, but he probably isn’t ahead of them.

"It doesn’t detract from what a good player he is, it’s just unfortunate for him that the position he plays has lots of talented players.