Guardiola: West Ham have 'huge advantage' over Man City & other teams in Europe 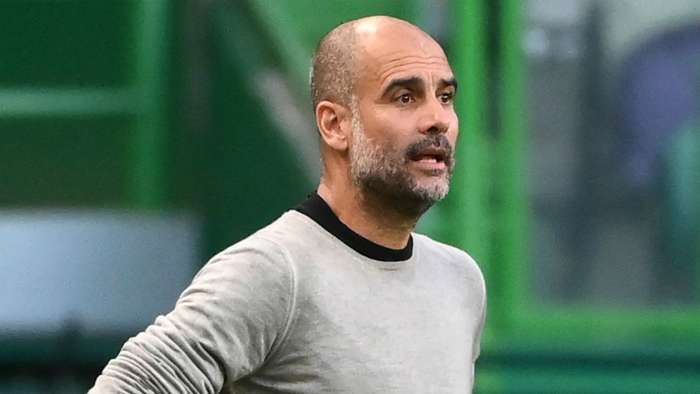 City sit 11th in the table heading into the weekend, with seven points from four games but, having played one fewer match than most, it can be regarded as a false position.

Wins in the last week over Arsenal and Porto have given the impression that City have settled following a rocky start to the campaign.

However, in West Ham they face a team who have hit a startling run of form, following up a 4-0 home win against Wolves by beating Leicester City 3-0 and drawing 3-3 at Tottenham thanks to a sensational late comeback.

Results that would have felt outlandish in any other season are becoming commonplace, with behind-closed-doors football in the time of the pandemic dancing to an unfamiliar beat.

"It's why this league was always so difficult and everyone can lose everywhere," said Guardiola, assessing the strains on the teams with European commitments.

"It's for this reason, some guys have seven or eight days to prepare, a huge advantage for the other team. We can adjust, accept, handle the situation if you are a player or manager.

"All the teams playing in Europe have the same problem. The schedule is crazy for everyone. For three, four games in a row maybe I decide to use the same squad and other ones I make changes."

As to whether the fixture congestion, among other factors, could lead to the most open title race in recent times, Guardiola was keen to stress it was too soon to make such a call.

"I don't know. It's too early to know," he said. "It looks like it because there are results not expected, but the situation we are in around the world - not just in this training centre, in our normal lives - is taking an influence in the game. We've played four, five games, it's not much."

He pointed to his team and Liverpool dominating recent seasons, but suggested that has been out of keeping with the normal scheme of things, saying: "I think before I came here, the Premier League is the most open league in the world, many teams can win it."

Speaking in a pre-match news conference on Friday, less than 24 hours before his side were due to take to the field at West Ham, Guardiola admitted he was yet to decide on his starting XI.

Kevin De Bruyne, Nathan Ake and Aymeric Laporte could be in the frame to return from injury but Guardiola has had a long list of recent casualties and would only go as far as to say that "some of them will be involved, some of them won't".

The London Stadium has been a happy hunting ground for City in recent seasons, with five successive wins having come by an aggregate of 22-1, West Ham shipping at least four goals in every game.

Such numbers illustrate the progress City have made, given they only scored 22 goals in their last 20 visits to West Ham's previous ground, Upton Park.

But Guardiola knows his team's heady run of high-scoring trips to east London could be halted this weekend. For the first time since West Ham beat City 1-0 in March 2009, the London side head into the game higher up the table than their Mancunian opponents.

"The past is the past. We've had good results but it's the past," Guardiola said. "They played really well against Tottenham – not just the last minute or the second half; they played with a lot of personality. They are in good form, in a good moment for them."

A quirk of West Ham's recent run of form is that their results so far correspond to the last time, back in 1928, that they scored three or more goals in four consecutive league games.