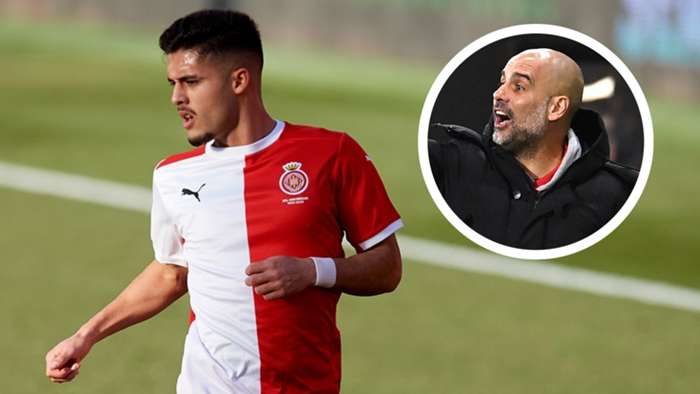 Pep Guardiola has worked with and improved some of modern footballsbest full-backs, including Jordi Alba, Philipp Lahm and Dani Alves.

So whenManchester City takean interest in a 17-year-old right-back, there is a distinct possibility that he has the potential to be something special.

Brazilian defender Yan Couto had yet to make a senior appearance for his hometown clubCoritiba, whom he joined as a 10-year-old, when some of Europes biggest clubs came knocking.

A starring role at the 2019 Under-17 World Cup, where Couto created more chances than any other player, including an assist for Lazaro’s late winner in the 2-1 victory over Mexico in the final, had scouts across Europe interested.

But Couto - who has been dubbed The new Dani Alves by onlookers -was drawn to the idea of a move to City, as well as the opportunity to work with Guardiola.

“After the U17 World Cup that we won with Brazil, some clubs were interested in me: Barcelona, Bayern Munich, Manchester City,” Couto tells Goal in an exclusive interview after he was named on the 2021 NXGN list of the top 50 wonderkids in world football.

“To me, Pep Guardiola is the best manager in the world, and Manchester City is one of the best clubs in the world at the moment,with a bright future. Therefore, to me, it was the best choice.”

Alves is just one of a number of outstanding full-backs to emerge from Brazil in recent times, with Cafu, Roberto Carlos and Marcelo just some of the Selecao stars to have lit up the European game in the last 25 years.

But it isformer Real Madrid and Roma defenderCicinho whom Couto sees a lot of himself in, with the former Brazil international having made a big impression in his homeland with Sao Paulo during the mid-2000s.

“My strongest point is the offensive side. Im an attacking full-back who helps the team to create chances.

After completing his switch to the Etihad Stadium for an initial fee of £5 million ($7m) in March 2020,Coutohas spent the current season on loan at Citys sister club Girona in the Spanish second division in a bid to aidhis transition to European football.

And he admits that it was noteasy moving during the Covid-19 pandemic, butafter a slow start acclimatising, he has started to become a regular for the Segunda Division outfit, and scored his first professional goal in last weeks win over Las Palmas.

“I always loved watching European football,” Couto says. “Because of the time difference, I used to wake up early in the morning so I could watch the Premier League, La Liga or Serie A. It was always a dream to come to play here one day.

“When I first arrived in Europe, at the beginning it was difficult. Because of the pandemic, I couldnt train or play games atmy last club in Brazil, so when I arrived my physical fitness wasnt the best.

“I had to work hard to get back to my ideal fitness level. Because of Covid,we cant do many things at the moment outside football.

“But I think I have worked really hard since I landed in Europe and I feel fine fitness-wise, almost at my full fitness.”

Meanwhile, his parent club have continued to go from strength-to-strength this season, with right-back Joao Cancelo having notablytaken his game to another level.

Under the guidance of Guardiola, Cancelo has made a major impact as an inverted full-back, helping the team’s build-up by moving into midfield and acting almost as a number eight when in possession, as well as a defender when City do not have the ball.

Couto has been watching the games from Spain with interest and, with his 19th birthday not until June, has plenty of time to force his way into Guardiola’s plans.

He also, though, has no doubts about the standards he will need to reach.

“I watch Man City games and they are havingan amazing season, winning a lot of games,” he says. “I’m very happy for them.

“I think I still have to improve a lot to be able to play for them. Man City is one of the best teams in the world, so I need to reach a high level.

“I still need to develop in many areas of my game to be able to play for them one day.”

It’s not just City that Couto is dreaming of playing for, either.

After representing the Selecao at the U17World Cup, he would love to pull on the famous yellow shirt with the senior team.

“Its one of my biggest dreams to play a World Cup with Brazil,” he says. “Every Brazilian player works and fights to be able to fulfil that dream one day.

“Its very difficult, as Brazil always has great full-backs. In my generation, there are great players coming in my position - Dodo, Emerson, among others.