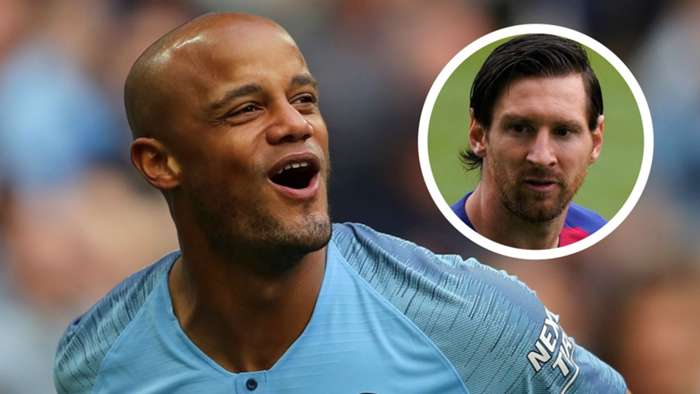 Pep Guardiola needs a new Vincent Kompany, not Lionel Messi, according to Owen Hargreaves, who thinks Manchester City must strengthen defensively in order to win the Champions League.

City were knocked out of Europe at the quarter-final stage for the third successive year earlier this month, this time at the hands of French outfit Lyon.

The Blues were beaten 3-1 in Lisbon after being picked off on the counter-attack by a side that could only manage a seventh-place finish in Ligue 1.

Guardiola was widely criticised for his chosen formation and starting XI , with David Silva, Bernardo Silva, Riyad Mahrez and Phil Foden all left on the bench and an alien 3-4-3 system adoptedin a bid to overpower Lyon in midfield.

Major changes are expected at Etihad Stadium after another early exit in the Champions League, and Messi is being strongly linked with a move to Manchester amid persistent rumours over his future at Barca.

The Argentine worked with Guardiola at Camp Nou between 2008 and 2012, but Hargeaves has urged his old club to focus on tightening up at the back rather than arranging a reunion.

"I'm sure Pep would take Messi if he could, but he will have seen the impact Virgil van Dijk had at Liverpool and realise he needs that kind of player more than anything," the ex-City midfielder told BT Sport.

“He needs the new Vincent Kompany, a leader who can make or break a game in the tight moments.”

Hargreaves added on City's defeat to Lyon and Liverpool's transformation since bringing in Van Dijk and Alisson:“I think Pep is the ultimate innovator. That’s what makes him so unique and nine times out of 10 he gets it right.

“The game against Lyon was probably the first time we’ve seen him try to adapt to the other team. In a way, Pep did what everyone has been urging him to do by being pragmatic.

“I don’t think he will do it again.

“The problem for City is that no team wins the Champions League without a world-class defence. Look at how Liverpool went from being a good team to a great team with Allison and Van Dijk.

"City were probably close to being the best team in the world when they had Vincent Kompany. Pep – along with Klopp – is the best. But if you can’t deal with pressure at certain moments in the game you are going to be found out.

“If you don’t have a Van Dijk or a Kompany then it’s hard and that’s probably why Pep picked the team he did.

“Pep will get criticised but he knows better than anyone what he needs. He needs a new Vinnie."

It has been reported that Messi is eager to leave Barca after their humiliating 8-2 loss to Bayern Munich in the last eight of the Champions League, but new Blaugrana boss Ronaldo Koeman is still hopeful that the six-time Ballon d'Or winner will end his career at Camp Nou.

“The rebuild at Barca is going to take time and Messi knows that Father Time remains undefeated," Hargreaves said of the Argentine's current situation."Leo might realise that he can’t afford to wait for the team to develop. Barca are still trying to play the way they did under Pep, but they have no power.

“I think Messi left the pitch for the first time thinking ‘what the hell is happening?’ But it’s been coming. We saw what PSG, Roma and Liverpool have done to them in recent years.

“Maybe it had to come like it did against Bayern for people to wake up and finally effect change. The best teams in the world aren’t just good in possession. They are good without the ball as well.