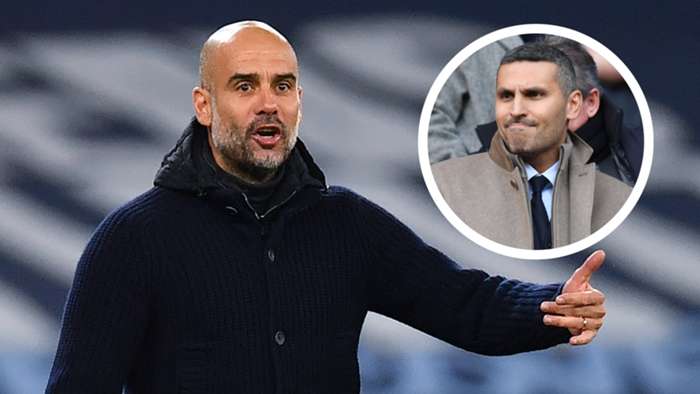 Pep Guardiola is still to decide on his Manchester City future with the clock ticking down on his current contract.

Guardiola recently said that there have been no talks over a contract extension ,with his focus remaining on the first-team during this season's hectic schedule.

However, the international break has providedrespite from the gruelling campaign and an opportunity for the Catalan to give some serious thought to his next move with just seven months remaining on his current deal.

The two-week break is the last until the end of March, with City having at least two games a week scheduled until the start of 2021.

Guardiola is in his fifth season at the Etihad, which is alreadyhis longest spell at a single clubhaving spent four years at Barcelona and three at Bayern Munich.

He recently hinted that he could potentially stay longer when he rejected the possibility of a return to Camp Nou after Barca presidential candidate Victor Font suggested he would like to bring him back to Camp Nou.

"I'm incredibly happy here, delighted to be in Manchester and hopefully I can do a good job this season to stay longer,” Guardiola said at the end of October.

That suggested that he was minded to remain at City and a club which is perfectly set up for the way the he likes to operate.

But any new deal would only be a 12-month extension, with Guardiola having no intention of replicating Sir Alex Ferguson or Arsene Wenger, who stayed at Manchester United and Arsenal, respectively, for more than two decades.

The 49-year-old is determined not to overstay his welcome, with the players needing fresh ideas to maintain their motivation.

City finished 18 points behind Premier League title-winnersLiverpool last season, and have made a slow start to the currentcampaign, winning fewer than half of their league games to sit 10th in the table, with Guardiola enduring his worst-ever start to a new season.

Heinsists that uncertainty around his future is not impacting performances, with injuries, illness and the lack of a pre-season all contributing to a difficult opening few weeks.

"When they are on the pitch they do absolutely everything with one manager or another because they are incredibly professional and they want to do well," he said. "Nothing changes. Absolutely nothing.”

City are desperate to keep the coach they see as the best in the world for as long as possible, and before the season started chairman Khaldoon Al Mubarak insisted that the relationship between the club and the manager meant any talks would be convivial.

"I think again, it will be a comfortable conversation and it will work out in the best way for Pep, for me and for the club."

Cityhave a shortlist of potential successors should Guardiola decide to end his stay at the club, with Goal having learned that RB Leipzig's Julian Nagelsman and former Tottenham boss Mauricio Pochettino are among the potential candidates.

But Guardiola remains their priority after becoming the most successful coach in the club's history, winning two Premier League titles and four domestic cup competitions in his four years so far.

There does, however, remain unfinished business in Europe, with performances in the Champions League during his time agonisingly disappointing.

Guardiola has never taken City beyond the quarter-finals of the competition, and their remains a frustration at the slim margins that saw them lose to Premier League rivals Tottenham and Liverpool in 2019 and 2018, respectively.

Last season's exit was particularly disappointing as City were dumped out in the last-eight by French side Lyon after a poor performance in Lisbon.

City are on the verge of reaching the knockout stages again, needing just a point from next week's game at Olympiacos to secure a place in the last-16.

There are concerns, however,that this season's intense schedule could impact any English clubs' chances of competing in Europe and for the Premier League.

Staying through the 2021-22 campaign would potentially give Guardiola a better chance of trying to challenge in all competitions as he has done throughout his career.

There also remains the enticing prospect that Lionel Messi could potentially join him at the Etihad, with the Argentinestill unhappy at Barca and available for free next summer after his fall-out with the Spanish giants at the end of the last campaign.