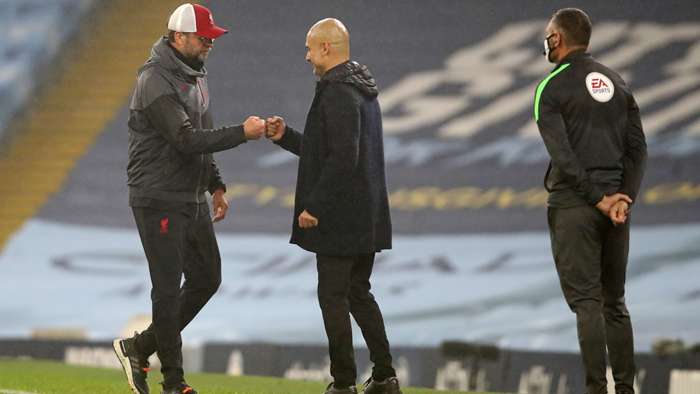 Guardiola and Klopp have been vocal about their belief that more substitutions are needed to protect players, and seeing Trent Alexander-Arnold go down with a calf injuryin the match at the Etihad Stadium brought the issue back up.

When asked by BBC Sport's Match of the Daywhat he and his Liverpool counterpart discussed after the final whistle, Guardiola replied: "We talked about five substitutions. If people want to give microphones so we can give our opinions... English player,right-back is injured.

"There are many guys with many, many cases. Around the world five subs are key, but here it's totally the opposite. We've talked about this many times."

"Here we believe we are more special, we don't protect the players, so that is why it is a disaster.

"This calendar came from a year before and I will demand for players to come back otherwise it will be difficult to maintain it."

Liverpool took the lead 13 minutes into the game when Mohamed Salah converted a penalty, with Gabriel Jesus firing in the equaliser later in the half.

City had a chance to go ahead shortly before the break when they were awarded a spot-kick, but Kevin De Bruyne missed the target.

"It was a tight game. We struggled in the first minutes because they had four players up front," Guardiola said. "Sadio Mane and Salah were playing between the lines then we adjusted after and had more control.

"The difference today was they got a penalty and we missed a penalty."

He added:"It is not easy to defend against Liverpool, normally they have three in attack and now four, they ran in behind and you cannot stay there and they play in between the players.