Haaland 'more of a killer' in the box than Mbappe, says Dortmund full-back Meunier 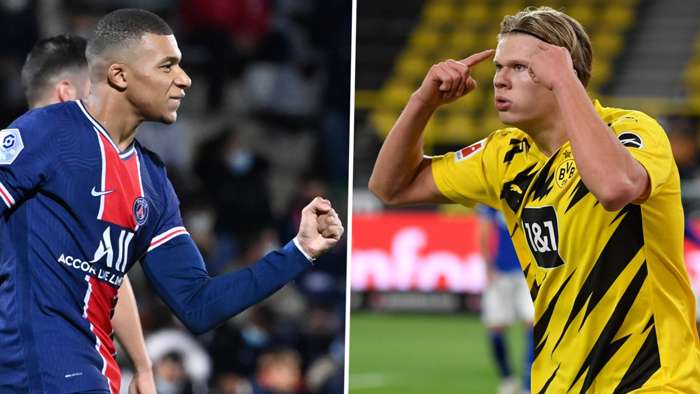 Erling Haaland is “much more of a killer” inside the box than Paris Saint-Germain's Kylian Mbappe, claims Borussia Dortmund's Thomas Meunier, with the right-back having played with both strikers.

Both Haaland and Mbappe have established themselves as two of the most lethal frontmen in world football, seemingly scoring at will and attracting the attention of Europe's biggest clubs in the process.

Playing in a similar position and with only two years between them, many have wondered which of the forwards would represent the better value for money. For Meunier, however, their styles are simply too different to compare.

Speaking to reporters, the Belgian said: “I can't compare the two, they're totally different. They're both quick, but that's it.

“Kylian is someone who looks for the one-v-one, he has a bit of everything. He makes me think of Thierry Henry.

“Erling on the other hand is more of a killer in the box, he can beat any goalkeeper in the world. In the coming years, he can take the steps needed to be among the best players in the world.

“They will both be among the best players in the world when they're around 25 years old.”

“I think it's in his blood,” Meunier added of Haaland's lethality in front of goal. “He's an old-school striker in his way of playing. I really like that kind of striker.

“He has two good feet; he can improve his heading but honestly, he's only 20 years old and has time in front of him to be one of the best in the world.

“I really believe that in the coming years he will be kind of a Robert Lewandowski or a Romelu Lukaku, scoring 25-30 goals a season. He will be one of the best.”

Mbappe's future is currently the topic of hot debate, with the World Cup winner's deal scheduled to run out in 2022. His strike partner, Neymar, is on the verge of signing an extension with PSG, however, which could go some way to convincing Mbappe to remain at the club.

With Lionel Messi set to become a free agent at the end of the season and linked with a move to Parc des Princes, playing with one of football's greatest ever players would likely be an extra incentive to stay.

Haaland, meanwhile, is contracted until 2024, with Dortmund showing no signs of sanctioning a sale any time soon despite admiring glances from La Liga and the Premier League.