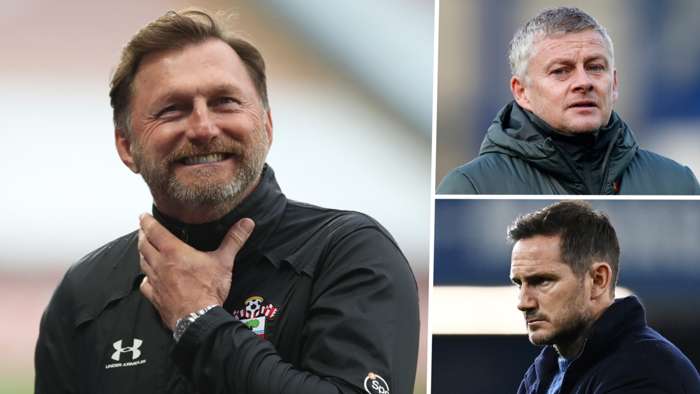 In a Premier League season defined by its inconsistencies, and against a backdrop of ‘Big Six’ clubs stumbling through awkward transitions, there is a lot of comfort to be found in watching Southampton.

Take this weekend’s 2-0 win over Newcastle, which temporarily lifted Southampton to the summit of the Premier League table. Despite missing two of their most important players -Danny Ings and Ryan Bertrand - their rhythms were not at all affected.

That is the kind of consistency and depth starkly absent at so many of the Premier League’s biggest clubs at the moment, most notably at Chelsea and Manchester United, where an absence of detailed tactical instruction is undermining the respective projects of Frank Lampard and Ole Gunnar Solskjaer.

Hasenhuttl would be a strongreplacement for either manager should those teams end up making a change in the dugout.

From the German school, Hasenhuttl’s targeted pressing, his focus on maximising the transitions, and his sudden tempo-changing vertical attacks are riding the crest of the wave of modern football tactics.

His Southampton side invariably play in a 4-2-2-2 formation characterised by dove-tailing centre-forwards and wingers who cut infield into the half-spaces.

InIngs and Che Adams he has found a striker partnership willing to drop off the front line, making great use of the fertile space in front of the opposition back four, and in Stuart Armstrong and Nathan Redmond he has two wide men ready to turn sharply in possession.

The basic idea is to move quickly between ball retention and vertical attacks, confounding the opponent with an explosive change of intent.

But it is a highly complex and dynamic system, relying on choreographed moves in training – ‘automatisms’ – to engage those gear changes, giving Southampton the feel of an NFL team working from a rehearsed playbook.

On the ball, careful recycling of possession has been used more often this season with the aim of allowing the players to rest and reset.

This is where Ings and Adams, dropping off to flick the ball around the corner, and Armstrong and Redmond, arriving on the blind side in the half-spaces, come into play - and what looks like speed of thought is in fact following set patterns of movement mapped out in training.

These four, along with captain James Ward-Prowse, end up in a narrow pentagon shape ready for quick-tempo interchanges.

Hasenhuttl talks a lot about a ‘red zone’, which is the space in front of the opposition back four and behind the midfield, and indeed all of their front five combine frequently in this area, with the full-backs providing width on the overlap.

Off the ball, Southampton are just as intricate – and just as focused on suddenly altering the tempo of the game in order to catch their opponent off guard.

Their press is specifically targeted for different areas of the pitch, engaged primarily in the opposition half for a short period before the team drop back.

Southampton will occasionally hunt the ball in packs, but more often they engage in a sudden pincer once the opponent has been backed into a corner, focusing mainly on marking passing lanes.

In other words, it is less frantic than a gegenpress, with attention paid to standing in the right positions to force an awkward pass out wide or a long ball forward. But once that ball is won – with players snapping into tackles in the central third – the aim is to use the transition to full effect, pulling the trigger on one of those choreographed vertical counters.

Firstly, they are more technical now, meaning longer periods of slow passing before the tempo change.

But once they do make a tackle and surge towards goal, Ward-Prowse has improved their speed, too, working tirelessly to get up and down the pitch and ensure Ings can get a quick shot off within seconds of a turnover.

Adams has also settled this season, forming an excellent partnership with Ings by dropping deeper than the No.9 to link play in his uniquely combative way. His tackling back, and increasingly telepathic understanding with Ings, gives Southampton a greater goalscoring threat.

Saints may not be able to hold onto their manager for too much longer. Hasnehuttl, who impressed at RB Leipzig before arriving in the Premier League, has proven his credentials and is most definitely ready for one of the top jobs in England.

He remains behind Mauricio Pochettino, a man with broadly similar tactical ideas, in the queue, but if the Argentine is poached by a more proactive club (Juventus and Barcelona could need a new head coach soon) then Hasenhuttl ought to be next on the list for United or Chelsea.

And both clubs have the personnel for a Hasenhuttl revolution.

At United, Solskjaer has laid down the groundwork for fast counterattacking football via Anthony Martial and Marcus Rashford, with energetic midfielders like Fred and Donny van de Beek clearly well-suited to Hasenhuttl’s dynamic pressing game.

Chelsea, meanwhile, spent the summer signing the sort of German-schooled players who would revel in Hasenhuttl’s instructions. Kai Havertz, Timo Werner, Hakim Ziyech, and Christian Pulisic all have experience in a successful hard-pressing, vertical-progression sidesin the Southampton mould.

What ismore, N’Golo Kante and Mason Mount have the buzzing box-to-box energy of a Hasenhuttl central midfield while Reece James and Ben Chilwell would excel with more concrete tactical direction behind their overlapping attacks.

Chelsea’s is a squad packed with intelligent young footballersready to be sculpted by a modern tactician; by a manager who is capable of creating the automatisms, the targeted pressing, and the detailed attacking lines needed to play with consistency at the highest level.

Under Lampard, Chelsea lack consistency because they are not receiving intricate instruction from the side lines.