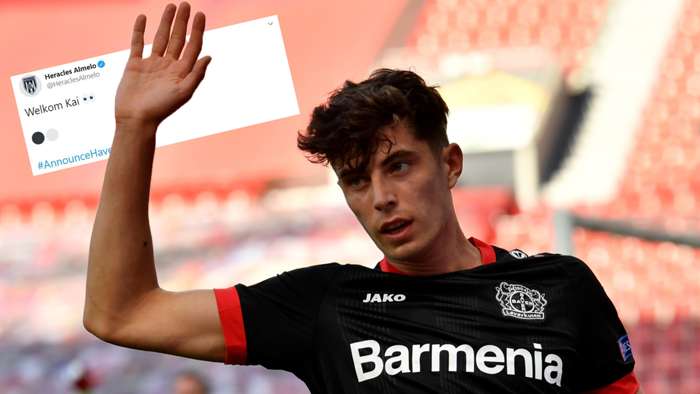 The 21-year-old, whowas an unused substitute in Germany's 1-1 draw with Spain, is expected to be announced as a Blues player within the next 24 hours.

Germany head coach Joachim Low opted not to use Havertz with his medical at Cobham Training Centre still pending as the Blues prepare to smash their transfer record andmake him the most expensive German player ever.

This comes with a five-year contract having been agreed, while the move is likely tocost Leverkusen's asking price as achievable add-ons will bump the fee up to apossible £90m ($118m).

Having left Germany, Havertz is set to complete a move that has taken over a month to finalise asChelsea moved without competition in a transfer window of aggressive spending.

Real Madrid and Bayern Munich were long considered the front runners to sign Havertz but the midfielder wanted to ensure he took the next step in his career this summer.

With Madrid's budgets limited this summer after the coronavirus pandemic and Munich limiting themselves to just one signing, in their £46m ($60m) move for Manchester City's Leroy Sane, it left just the Blues willing and able to complete a deal.

Leverkusen have already lined up their Havertz replacement by agreeing on a €28m (£25m/$33m) fee for Roma forwardPatrick Schick. They beat competition from RB Leipzig, who had the Czech Republic international on loan last season.

Frank Lampard will be delighted to have signed a lot of his top targets this summer with Havertz set to be the sixth signing of the summer and transfer spending set to reach over £200m ($262m).

Furthermore, Chelsea had already signed both Timo Werner and Hakim Ziyech from RB Leipzig and Ajax at a combined cost of £84 million ($105m).

The Blues will next target a new goalkeeper to compete with Kepa Arrizabalaga as Rennes' Eduoard Mendy has emerged as the club's primary target.

Rennes are reluctant to sell their no1 but Chelsea's latest offer has reached €20 million (£18m/$24m) after a first offer was turned down by the Ligue 1 club.

Meanwhile, Chelsea will try to raise further funds by selling fringe players and loanees on their books with Emerson Palmieri seeking a way out of west London with Internazionale interested.

AC Milan are in talks for Tiemoue Bakayoko as the clubs discuss a loan deal with the Blues preferring to add in an obligation to buy, while the Serie A side are hoping to stick to an option to buy the midfielder.

Michy Batshuayi has been testing the water over a move with three strikers now ahead of him in the pecking order. The future of the likes of Jorginho also remains in doubt and Rennes are one of several clubs to offer a loan option to Fikayo Tomori after the signing of Silva from PSG last week.