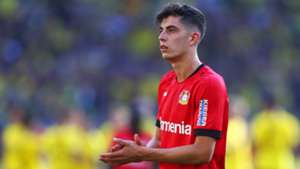 Havertz is attracting attention from some of the world's biggest clubs ahead of the summer transfer window. The 20-year-old is currently enjoying another stellar season at Leverkusen, and seems to have stepped his game up an extra gear since the Bundesliga restart on May 18.

The Germany international has hit five goals in the club's first four outings following the coronavirus-enforced break in the campaign, taking his tally to 15 across all competitions.

United are reportedly keen on luring Havertz to Old Trafford at the end of the season, and Bayern have also been tipped to try and prise a talismanic figure away from their domestic rivals.

Rolfes is aware that "all the great clubs" are keeping tabs on the young playmaker, but remains optimistic that he will choose to remain at the Bay Arena for at least another couple of years.

The Leverkusen chief told Marca: "We don't know yet what will happen to Kai. We know that all the great clubs from Germany and Europe are after him and that he has the ability to play anywhere.

"He is a fantastic player and for many years Bayern have always been behind the young German talents, but we have to wait, there are many factors that influence. His future is not decided at all yet.

"Kai has a contract until 2022 and we are calm. I can only say that I love him and that I like to see him play. I'd like to see him as long as possible with the Bayer Leverkusen shirt.

"I have no preferences when it comes to other teams. He will be one of the great dominators of the game in the next 10 years."

Rolfes added on the qualities which have made Havertz such a sought-after talent in recent seasons: "He is a very complete player and has also shown that he is a good finisher with his head and both feet.

"He is fast enough to play as a striker, but he is also a great No. 10, with creativity and timing. He can also play on the wing, not as a winger, but cutting inside. And yes, being able to score goals pays very well."