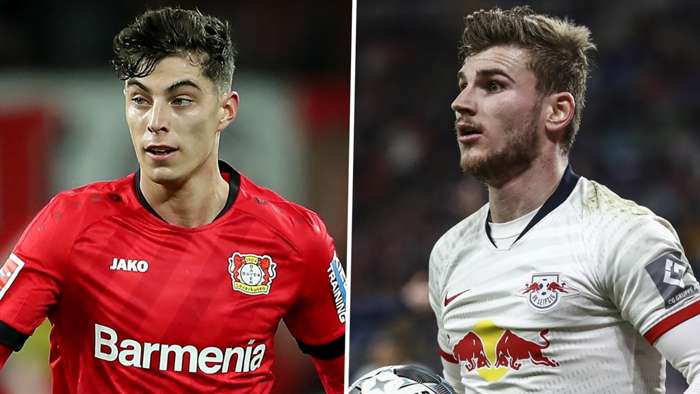 Germany national team manager Joachim Low believes his side can benefit from Timo Werner and Kai Havertz taking the next step in their careers at Chelsea.

The duo left the Bundesliga this summer in favour of moves to Stamford Bridge, with Havertz joining fromBayer Leverkusen on Fridayin a deal worth £70 million ($91m) including add-ons.

That transfer followed Chelsea's signing of Werner in June,with the striker moving from RB Leipzig in a £47.5 million ($59m) deal.

Low did admit to mixed feelings over the transfers, as the Bundesligawas forced to bid farewelltotwo of its top young stars.

However, he believes that Germany can ultimately profit if the duo can improve and become global stars at Stamford Bridge under Frank Lampard.

"I see it as negative when such great talents as Kai are no longer in the Bundesliga," Low said ahead of his side's Nations League match against Switzerland on Sunday.

"But I also see the positives. The players develop their personalities abroad. I think if Kai and Timo take the next step at Chelsea, that will of course help us."

Low is hoping to see another of his attackers change clubs in the near future, or at the very least find more minutes at his current side.

Julian Draxler has often seen himself outside of Paris Saint-Germain's first-choice lineup since moving to Paris fromWolfsburg in 2016.

Though unquestionably talented, the 26-year-old has been forced to compete with the likes of Angel Di Maria, Kylian Mbappe and Neymar for minutes in a loaded PSG attack.

Low has admitted that he is not satisfied with Draxler's current club situation and revealed that the pair had spoken about it.

"I had a long conversation with him," Low said."It would be important for Julian to play week in week out at club level. But I don't know how Paris are planning with him."

After a 1-1 draw against Spain on Thursday, Germany will continue Nations League play against the Swiss atSt. Jakob-Parkin Basel. Low revealed that Arsenal goalkeeper Bernd Leno would get the start after Kevin Trapp started against Spain.